For a while now, there have been reports of Malayalam hit film Ayyappanum Koshiyum being remade in Telugu. And now, makers have confirmed that actors Pawan Kalyan and Rana Daggubati have been locked in to play the roles of Biju Menon and Prithviraj Sukumaran. 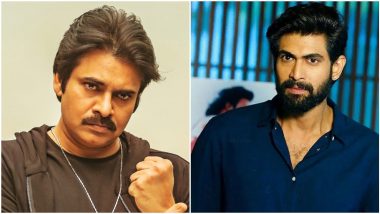 For a while now, there have been reports of Malayalam hit film Ayyappanum Koshiyum being remade in Telugu, Tamil and Hindi. While there is no update on the Hindi and Tamil versions, the Telugu remake is indeed happening and the casting has also been done. And now, the makers have indeed confirmed that Pawan Kalyan and Rana Daggubati have been locked in to play the roles of Biju Menon and Prithviraj Sukumaran, respectively. Power Star Pawan Kalyan Announces About His New Film With Saagar K Chandra On The Occasion Of Dussehra 2020! (Watch Video).

The Telugu remake will be helmed by Saagar K Chandra and produced by Suryadevara Naga Vamsi. Thaman S has been roped in as the music director for the venture, that is currently under the works in the name of Production No 12. The makers released the first ever announcement teaser of the film on December 21. Viraata Parvam: Rana Daggubati’s First Glimpse As Comrade Ravanna Unveiled on His 36th Birthday (Watch Video).

Looks like 2021 will be a very busy year for both Rana Daggubati and Pawan Kalyan. While the power star of south cinema has Vakeel Saab in his kitty, he has also given the nod to star in a periodical drama which will be helmed by Krish. He also has projects lined up with Surendra Reddy and Harish Shankar. Rana, on the other hand is taking it slow and has Aranya lined up for release and is currently shooting for Virata Parvam.

(The above story first appeared on LatestLY on Dec 21, 2020 11:17 AM IST. For more news and updates on politics, world, sports, entertainment and lifestyle, log on to our website latestly.com).