Right from making the audience go wow with her debut in Premam (2015), setting an example by rejecting a fairness cream deal to even dancing in her films with energy that’s unmatchable, Sai Pallavi is a rare gem. And so, here's looking at the best dance numbers of the actress on her born day. Watch!!! 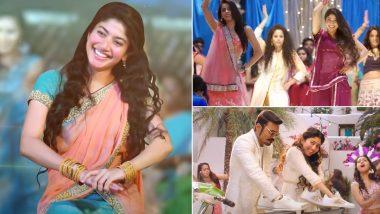 There are artists and then there are actors who influence. One such actress from the South film industry is definitely the ever-charming Sai Pallavi who has time and she proved that she's irreplaceable. Even though she has done little work in the fraternity yet, but in quite a short span she has created a mark. Right from making the audience go wow with her debut in Premam (2015), setting an example by rejecting a fairness cream deal to even dancing in her films with energy that’s unmatchable, Sai is a rare gem. And as she celebrates her birthday today (May 9), let’s look at some of her popular dance numbers. Turn up the volume as it's time to have a blast! Naga Chaitanya Wishes Sai Pallavi on Her Birthday with This Lovely Still from Love Story! (View Pic).

From the film Love Story, this melody is one of the most loved tunes of the actress. In this one, we see her dancing her heart out and acing the choreography. Just look at her, we bet you’ll fall in love with her persona.

Sai Pallavi’s expression in this wedding-themed song is just beyond words. The best part about her is that she does not dance for the sake of it but instead feels the lyrics and performs to the 't'. The song is from the film Fidaa and also sees Varun Tej.

Nani and Sai’s chemistry in this song from MCA (Middle Class Abbayi) is superhit. The actress in the track is fun and full of zeal. She dances in a saree and makes it look so easy... but we all know that it’s not. Bravo!

Sai can definitely be called the dancing queen of South cinema, as you can’t stop starring at her when she moves her body. From the movie Maari 2, this song stars the actress alongside Dhanush and it’s one of the best track of Pallavi’s career so far.

Sai and Nani are terrific in this number, but it’s the former who takes the cake. The actress performs as if there's no tomorrow and those thumkas... we are stunned. Is there anything, she can’t do?

This song of the actress will bring a smile to your face. The melody is slow and the visuals are amazing which adds an altogether different aura to the track. The actress is graceful and we love it.

From the movie Padi Padi Leche Manasu, the start of the song wherein Sai dances on the terrace and flaunts some classical moves will make you go wow. The song also sees actor Sharwanand.

Well, the clip below, is Sai's breakthrough performance as Malar from her debut film Premam where her moves got her noticed and the rest is history. Watch!

That’s it, guys! These are some of the best Sai dance numbers which have millions of views on YouTube and are fans' favourite. The ada and grace she adds while dancing is magical. LatestLY wishes Sai Pallavi a happy birthday. Stay tuned!

(The above story first appeared on LatestLY on May 09, 2021 08:20 AM IST. For more news and updates on politics, world, sports, entertainment and lifestyle, log on to our website latestly.com).