Sarkaru Vaari Paata is the upcoming Telugu film starring Mahesh Babu and Keerthy Suresh in the lead. The makers have shared that the shooting of the film has commenced from today. 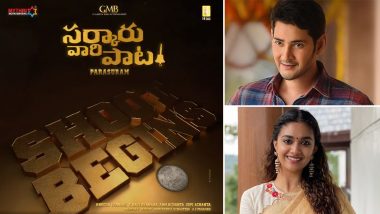 Sarkaru Vaari Paata is the upcoming Telugu film starring Mahesh Babu and Keerthy Suresh in the lead. Fans have been eagerly waiting for the makers to share an update on the film and here’s one. The makers have shared that the shooting of Sarkaru Vaari Paata has commenced from today (January 25). While sharing the news, they shared a short video and captioned it as, “The auction and the action begins. #SarkaruVaariPaataShuru.” Fans have been thrilled ever since this update has been shared! Sarkaru Vaari Paata: Shooting Of Mahesh Babu And Keerthy Suresh Starrer To Commence From January 2021.

The short video does not feature the lead actors of Sarkaru Vaari Paata. It just highlights the director’s name and a one rupee coin flipping below ‘Shoot Begins’ text. It was just a few days ago when we saw pictures of Mahesh Babu (along with his family) and Keerthy Suresh at Hyderabad airport heading to Dubai. Besides work, the actor had another reason to take his family along and that was because it was his wife Namrata Shirodkar’s birthday. Mahesh Babu to Play Double Role in Parasuram’s Sarkaru Vaari Paata?

The Auction and the Action begins 🎬 #SarkaruVaariPaataShuru 💥

Directed by Parasuram, it is reported that Mahesh Babu will be seen playing dual roles in Sarkaru Vaari Paata. Produced under the banners of 14 Reels Plus, Mythri Movie Makers and GMB Entertainment, the makers are yet to reveal the film’s release date.

(The above story first appeared on LatestLY on Jan 25, 2021 11:10 AM IST. For more news and updates on politics, world, sports, entertainment and lifestyle, log on to our website latestly.com).