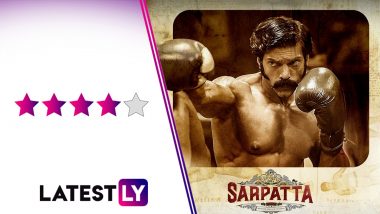 The movie is set during the Emergency Period, where the political atmosphere is filled with uncertainties about the stability of the then DMK government. At the same time, the then named Madras is upbeat about the boxing tournament that sees the local clans clash with each other.

Since we have to root for one, we have the Sarpatta clan, whose head coach and the most respected authority is Rangan Vaathiyar (Pasupathy). Their biggest opponent is the Idiyappa clan, whose champion Vembulli (John Kokken) has been flooring Sarpatta's boxers for some time, and giving Sarpatta frequent humiliation.

Then there is Kabilan (Arya), who adores Rangan and himself aims to be a boxer, if it was not for his mother (Anupama Kumar) who doesn't want him to follow his dead father's footsteps. In the beginning, there is a Dronacharya-Eklavya kind of relationship between Rangan and Kabilan. The former, considering the latter's mother's emotions, refuses to train him, while the latter remains obstinately by his mentor's side, refusing to miss any match or meeting of the clan. There is also Vetriselvan (Kalaiyarasan), Rangan's son who is irked by the fact, that despite being a boxer, his father keeps getting him sidelined when it comes to facing Vembuli.

Of course, Kabilan can't remain in the sidelines for long, and soon he becomes Rangan's main candidate to take on Vembuli.

Things ain't going to be easy, as we have seen around us, it is often the internal enemies who cause more damage than the external foes. Kabilan's rise to championship sees more challenges from within his clan than that facing him in the ring.

Interestingly, Sarpatta Parambarai comes merely days on Amazon Prime Video after another boxing drama Toofaan. Both the films are about the underdogs who become boxing champions who earn success fast before it goes all down, and then they rise up like the phoenix. Both are underserved by a predictable storyline, that goes with the genre of sports drama. Yet, it is the rustic milieu, the making and the treatment, not to mention the excellent roster of actors and characters, that make Sarpatta Parambarai win more rounds than its Hindi counterpart. Toofaan Movie Review: Farhan Akhtar and Mrunal Thakur's Boxing Drama is A Predictable Affair With a Relevant Social Angle.

What's fascinating is to see the character reversal here for the protagonists of both the films. Toofaan's protagonist is a goon who turns into a new leaf once he gets into boxing. In Sarpatta Parambarai, it is the other way round. Kabilan's pitfall comes when he makes his mother's nightmare come true, when he decides to use his aggression and punches outside the ring. Still, this is a man whose machismo is restricted only near the men around him (there is a high amount of prickly male egos on display). In front of his mother and his wife Mariamma (Dushara Vijayan), he is a bawling kid scared of their remonstrations.

His rise to championship is paved with some exhilarating scenes. The intro scene, that establishes all the sets of main characters, the boxing tourney and the perennial rival gets the mood alright. Kabilan's unexpected first ringside bout is a thumping moment, but it is the interval fight that shakes things up.

Pa Ranjith is a filmmaker who doesn't resist from delving into caste-politics. Kabilan's moment of humiliation is a proof of that, when the goons, sent by an upper-caste member of his clan, rips off his trouser, leaving his modesty to public display. It reevaluates the reason why Kabilan is facing opposition from his own clan, that has little to do with his underdog status and more to do with his identity. More than how the match turns, it is his enemy showing him his 'place' that pushes our hero to his rock-bottom.

Yes, he doesn't stay there, as Sarpatta Parambarai allows the protagonist to redeem himself at the very place, where he lost himself. The journey is predictable, the outcome as well, but where Pa Ranjith scores is how that journey is paved. Especially the boxing matches that leave you tethered to your screens, even if you think you know how they turn out (while I like the main matches, my personal fave is when Kabilan faces 'Dancing Rose').

I could call this a return to form for the director. Kaala and Kabali weren't bad, but Pa Ranjith's abilities to tell a fine story did get overshadowed by Rajinikanth's superstardom in them. In Sarpatta Parambarai, he manages to offer a very engaging mainstream film, that retains his sensibilities as a filmmaker while also working around its lead star's capabilities.

The lengthy runtime is kind of a downside, but with plenty happening around Kabilan, it may not matter much, Narayanan's score helps in keeping things amped up.

Talking of the performances, Aryan with his thick moustache has delivered one of his best performances here. His physical commitment aside, it is the emotional frailty where the actor scores more. There was one scene of the actor where I felt some rough edges, the one where he breaks down in front of his mother. I felt it to be a little artificial and farcical, but maybe because the scene felt loud in its tone, but it doesn't really helped me get to the character's emotional turmoil then. Otherwise, Arya nearly aces in every scene, especially scoring in the boxing ring with his character.

The best performance comes from the veteran Pasupathy, who manages to dominate any scene he is with merely a glance. He brings so much powerful aura to the role, that when Kabilan tells Rangan that he believes latter could even beat Muhammad Ali, I did believe him there.

I also liked John Vijay's performance as the Anglo-Indian 'Daddy', a father-like figure for Kabilan. Dushara Vijayan is a talent to watch out for, she stands out with a fiery performance. Anupama Kumar, Kalaiyarasan, Sanchana Natarajan (Vetrivel's wife), John Kokken,  Shabeer Kallarakkal (Dancing Rose) deliver their parts well loud and well!

- The Predictable Storyline and The Length

Sarpatta Parambarai has turned a nimble-footed boxing drama that works around its predictable beats to deliver some knockout punches with its treatment and performances. Do not miss this! Sarpatta Parambarai is streaming on Amazon Prime Video.

(The above story first appeared on LatestLY on Jul 22, 2021 12:16 AM IST. For more news and updates on politics, world, sports, entertainment and lifestyle, log on to our website latestly.com).