Unnikrishnan Namboothiri, Veteran Malayalam Actor, Dies of COVID-19 at the Age of 98

The actor was 98 years old and was admitted to a private hospital in Kannur for treatment. He is survived by his children Devi, Bhavadas, Yamuna and P V Kunhikrishnan. 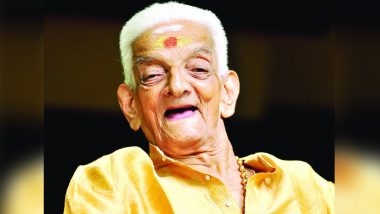 Malayalam actor Unnikrishnan Namboothiri who was known for playing the role of a grandfather in many films has left for the heavenly abode. The actor was first seen in the award-winning movie Desadanam and was a favourite of many. The actor was 98 years old and was admitted to a private hospital in Kannur for treatment. He is survived by his children Devi, Bhavadas, Yamuna and P V Kunhikrishnan. Thalapathy Vijay’s ‘Master’ Co-Producer Demands Rs 25 Crore for Leaked Scenes From the Accused - Reports.

The veteran actor had contracted Covid and was said to have recovered from it. He was rushed to the hospital again when he contracted pneumonia and was under treatment for the same. He soon recovered from the diseases as well and was sent home after a few days. But soon after his discharge, Namboothiri got high fever again and was taken to the hospital again. After several tests, it was discovered that he has contracted Covid.

Unnikrishnan Namboothiri is also the father-in-law of musician, composer and filmmaker Kaithapram Damodaran Namboothiri, and grandfather of composer Deepankuran. He made his debut with in the year 1996 with Jayaraj's film Desadanam. Some of his other prominent work was seen in films like Chandramukhi, Rappakal, Kalyanaraman, Pokkiri Raja, Pammal K Sambandham, Kaliyattam, Meghamalhar, Kaliyattam, Loudspeaker, Mayamohini, Kandukondain Kandukondain amongst others. Liger Actor Vijay Deverakonda Talks About the Worried Days, Shares Video of Fans Going Crazy for His Upcoming Movie.

He was also a part of ’ and the film Mazhavillinattam Vare where he collaborated with his son-in-law Kaithapram Damodaran Namboothiri. Kaithapram was the co-writer and the director of the film. He took up many comic roles as well. His most iconic role till date remains the character of Dileep’s grandfather, named Thekkedathu Gopalakrishnan in Kalyanaraman. Recently, he was also headlining the news for the fact that for the first time ever, he couldn’t cast vote in the LSG polls due to the pandemic.

(The above story first appeared on LatestLY on Jan 20, 2021 08:43 PM IST. For more news and updates on politics, world, sports, entertainment and lifestyle, log on to our website latestly.com).