Valmiki is a remake of the Tamil film Jigarthanda, which was helmed by Karthik Subbaraj. This upcoming directed by Harish Shankar also features Varun Tej as Kammaraju and Atharvaa as Balamurali Rama in the lead roles. 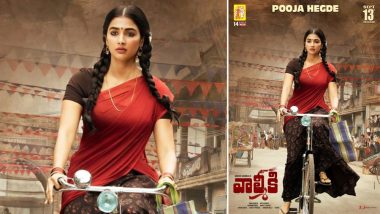 Pooja Hegde was last seen in Mahesh Babu (Rishi Kumar) starrer Maharshi. She essayed a glamorous role, Rishi’s friend and a love interest who works in a gaming company. Fans were impressed with her role and performance in Vamsi Paidipally's directorial. The actress’ look from her upcoming flick is out and it has left all her fans surprised. Pooja would next be seen in the Telugu film, Valmiki. She’d be portraying the character Sridevi, a village belle. Twitterati is impressed to see her in a traditional, davani avatar.

Davani is a traditional garment worn by young girls or women in South India. It is also known as a two-piece sari or half saree. The skirt and blouse and the dupatta are usually contrasting to each other, and that’s what we get to see in this poster. Pooja Hegde, who is seen seated on a bicycle, has worn a floral print skirt paired with a plain blouse and a contrasting coloured dupatta. Her plaited hair makes her look even adorable.

Pooja Hegde as Sridevi in Valmiki

All Hearts for Pooja Hegde's look

Valmiki Is Declared A Hit Already

Fans Are Loving Her Innocent Look

Traditional Attire Is Being Loved By All

Looking desi girl... You are aswame madam Pooja... You are favourite South Indian Actress.. Love you...

Valmiki is a remake of the Tamil film Jigarthanda, which was helmed by Karthik Subbaraj. This upcoming flick directed by Harish Shankar also features Varun Tej as Kammaraju and Atharvaa as Balamurali Rama in the lead roles. This movie which is produced under the banner of 14 Reels Plus, is hitting the big screens on September 13.

(The above story first appeared on LatestLY on Aug 26, 2019 11:02 AM IST. For more news and updates on politics, world, sports, entertainment and lifestyle, log on to our website latestly.com).