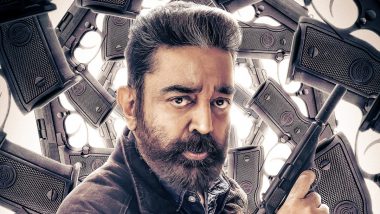 Fans of Tamil superstar Kamal Haasan can soon savour a Metaverse experience of his upcoming film Vikram, helmed by Lokesh Kanagaraj of Kaithi and Master fame. Kamal Haasan is the producer of the movie through his production company Rajkamal and has tied up with Fantico, a Vistas Media Capital company, to launch the movie's Metaverse experience on internet. Vikram Trailer: Kamal Haasan, Vijay Sethupathi and Fahadh Faasil’s Film Is High on Action With Fiery Fight Scenes! (Watch Video).

The Non-Fungible Token (NFT) project will help his fans experience the unique art and digital works and posters of the movie.  Vikram's NFTs were launched at the Cannes Film festival on May 18, following whcih Kamal Haasan tweeted that the movie will be launched in the Metaverse and will be available on Vikram.vistaverse.io.

It is to be noted that NFTs are individual tokens with valuable information stored in them and they hold a value primarily set by the market and demand. The NFTs can be bought and sold like any other physical art form and their unique data makes them verifiable and validate their ownership and the transfer of tokens between owners. Vikram: Vijay Sethupathi, Kamal Haasan and Fahadh Faasil Starrer Film’s Trailer To Launch at Cannes 2022 on May 18.

The trailer and the audio launch of the much-anticipated movie garnered more than 15 million views. Kamal Haasan is playing the role of a retired top cop in the film, whcih also features Vijay Sethupathi and Fahad Fazil in pivotal roles. Sethupathi, according to reports, is playing the role of an antagonist. Tamil superstar Suriya will be making a cameo appearance in the movie.

(The above story first appeared on LatestLY on May 24, 2022 08:58 PM IST. For more news and updates on politics, world, sports, entertainment and lifestyle, log on to our website latestly.com).