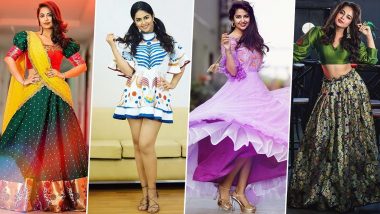 Avika Gor has been a prominent face from the entertainment space since quite a long time. It was in the year 2008 when she was introduced as the little Anandi in Colors TV serial, Balika Vadhu and from there on she ruled hearts. Her adolescent act was loved by fans and in no time she became one of the topmost actresses from Indian TV.  Later, in her career, she bagged the role of Simar's sister Roli in Sasural Simar Ka (2011) and again weaved magic with her acting prowess. That's not it, as she has also appeared in regional films in lead roles. All that being said, Avika turns a year older on June 30, 2020, we are here to praise the girl. Balika Vadhu Returns to Colors: Here's the Telecast Time and Schedule for Avika Gor - Avinash Mukherjee's Social Drama (Watch Video).

Well, as we all know that she is a fabulous entertainer, but what people don't know is that she has a super style taste. A look at her Instagram feed and we bet you will be going wow. From desi to modern, the birthday girl's fashion picks looks curated and so on point. And so, here are a few of her stylish pics from IG. Check it out. Khatron Ke Khiladi 9: Avika Gor Gets Eliminated, Shamita Shetty Resumes Shooting After Recovering From Dengue.

First things first, when you only want a desi couture and also don't want to compromise on the glitter part. Ah-mazing!
View this post on Instagram

Look at that those sleeves, modern yet so ethnic!

When fashion and flaunting your mid-riff go hand-in-hand!!

Here's Avika looking pretty in a larger-than-life gown. Look at that grin!

A white mini with colourful prints all over. A smart choice to grab attention!

Not your regular six-yard!

That's it, guys! Hope you liked the above fashion-forward compilation of the talented TV star. Gor turns 23 on this day and we wish her all the good luck and a stunning birthday ahead. Stay tuned!

(The above story first appeared on LatestLY on Jun 30, 2020 08:40 AM IST. For more news and updates on politics, world, sports, entertainment and lifestyle, log on to our website latestly.com).