Earlier, we've seen netizens demanding a ban on the Tanishq ad, saying no Bollywood films having star kids and well, the latest to fall prey to this is Prakash Jha's web series Aashram 2 which stars Bobby Deol as the lead. #BanAashramWebseries' is what Twitterverse are churning. Have a look. 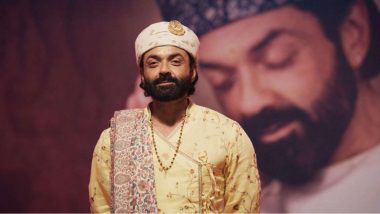 The BAN trend on the micro-blogging site Twitter is gaining momentum. Earlier, we've seen netizens demanding to ban the Tanishq ad, saying no Bollywood films having star kids and more. And well, the latest to fall prey to this is Prakash Jha's web series Aashram 2 which stars Bobby Deol as the lead. 'Ban Aashram Web Series' is what Twitterverse are churning. The reason behind the same is that according to them the series is anti-Hindu and depicts the saints in the wrong light. There are numerous tweets claiming the ban on Aashram. Aashram Chapter 2 Review: The Exploits of Bobby Deol’s Baba Nirala Still Engage, but the Series Fails to Live Up to Its True Potential.

FYI, in the fictional story which streams on MX Player, Bobby Deol essays the role of a Hindu godman who exploits women in the name of religion. Seems like this is the thing which has irked the netizens and so they are in no mood to tolerate. The chaos has taken place after Prakash Jha and Bobby Deol have been slapped by a legal notice via a Jodhpur court for the alleged controversial portrayal of Hindu saints in Aashram. Here, check out the tweets below. Aashram Chapter 2 Full Episodes in HD Leaked on Tamilrockers & Torrent Links for Free Download and Watch Online; Bobby Deol’s Web Series Becomes a Victim of Online Piracy!

Good to hear that Rajasthan highcourt has accepted to hear case against Bobby Deol & Prakash Jha.There is a dire need of censor board that would have stringent guidelines for Webseries. Let's standup against people who enjoy free run insulting our community!#BanAashramWebseries https://t.co/YDJBisTJHD

One more Web Series is launch to hurt Hindu Faith.

Every other week one web series or movie releases with a Hinduphobic Theme.

#BanAashramWebseries plz make a series on 'madarasa' because secularism is for all dharma not only for Hindus, stop targeting us 😠

Are You Listening, Prakash Jha?

It seems Prakash Jha is an accomplice to leftists that's why playing with the hindu beliefs.#BanAashramWebseries

Aashram web series is a thoughtful,pre-planned conspiracy against Hinduism! By showing Hindu Saints as criminal & corrupted, they tried to tarnish d image of Ashram system to confuse Hindus!

And Why infamy to Ashram system when story is fictional?#BanAashramWebseries@AdvKhush pic.twitter.com/2Tq0jEzW3F

The part of the petition filed by Khush Khandelwal at the Jodhpur District Court against Aashram reads, “The portrayal of Deol as a Hindu saint has hurt the religious sentiments of Hindus, who respect and worship saints. His portrayal as a rapist, corrupt and drug dealer has diminished the place saints hold for Hindus." Stay tuned!

(The above story first appeared on LatestLY on Dec 16, 2020 10:49 AM IST. For more news and updates on politics, world, sports, entertainment and lifestyle, log on to our website latestly.com).