Paras' mom had once told her son famously, "36 aayengi 36 jaayenge, teri wali toh teri maa hi laayegi." However, looks like Mahira has Mommy Chhabra's approval at the end of it all. 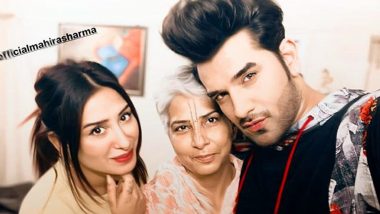 Looks like Bigg Boss 13 besties Paras Chhabra and Mahira Sharma are making good on their vow to stand by each other, no matter what. And their bond only seems to be growing with each passing day. Apart from their time to time meetups with other contestants, Paras and Mahira, who have earned a monicker for themselves as 'PaHira', recently spent March 22, 2020, Janata Curfew in each other's company, with Paras even uploading an adorable picture of the two of them with an adorable caption "Be with the one who makes you feel safe..@officialmahirasharma" Mujhse Shaadi Karoge Winner Aanchal Khurana On Paras Chhabra - Mahira Sharma’s Bond 'If They Plan to Be Together, I Will Be The Happiest'.

However, what also caught everyone's attention was Mahira's meet up with Paras' mother. In the snap, we can see Mahira sharing smiles with Paras and his mother.

Check Out The Photo Below:

Paras and Mahira made headlines inside the Bigg Boss 13 house for their growing closeness. In fact, while Paras did admit that he had feelings for Mahira, the lady always maintained that she only felt for Paras as a friend. Bigg Boss 13 Day 110 Preview: Rashami Desai Breaks Down And Sidharth Shukla Consoles Her, Paras Chhabra's Mother Slams His Closeness With Mahira Sharma (Watch Video).

What is also surprising for us is that back in the house when Paras' mother had come inside, she seemed to be less than thrilled to meet Mahira. In fact, Paras' mom had also told her son famously, "36 aayengi 36 jaayenge, teri wali toh teri maa hi laayegi." However, looks like Mahira has Mommy Chhabra's approval at the end of it all.

(The above story first appeared on LatestLY on Mar 24, 2020 11:58 AM IST. For more news and updates on politics, world, sports, entertainment and lifestyle, log on to our website latestly.com).