When Queen Rubina is asked to name two contestants who will gather task materials. She says Pavitra and Abhishek, when she meant Abhinav. Yes, she called her husband by the wrong name. On National TV. 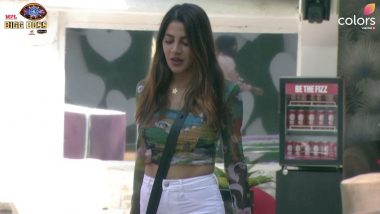 A new episode of Bigg Boss 14 will add some spice to our TV viewing. The new captaincy task that started in the previous episode will continue even today. The contestants, for the sake of God, cannot stick to the rules. Right off the bat, we will see them break the rules and the contestants will have to pay a heavy price for it. The new episode was more about conversations, scheming and plotting. The fights were mostly wicked jibes at each other. There were a couple of extremely funny moments as well. Bigg Boss 14 November 17 Episode: Kavita Kaushik - Eijaz Khan's Argument, Rubina Dilaik and Rahul Vaidya Competing in the Captaincy Task - 5 Highlights of BB 14.

Nikki Starts The Task Before Intimation

Nikki starts breaking the hearts. Everyone tells her that the task has not begun, but she says that the task has begun for her. Aly says there was a buffalo in his village, who used to run amok and everyone used to watch her. After she was done destroying things, villagers used to resume work. Bigg Boss 14 November 16 Episode: Kavita, Nikki, Jaan, Rubina, Eijaz, Jasmin NOMINATED - 5 Highlights of BB14.

When Queen Rubina is asked to name two contestants who will gather task materials. She says Pavitra and Abhishek, when she meant Abhinav. Yes, she called her husband by the wrong name. On National TV.

Instead of painting the hearts, contestants focus their energy on breaking them. All the hearts are broken. Bigg Boss tells them since there are no hearts there cannot be a task. Hence, no captain this week.

Once again, Nikki refuses to do her duties and wash the utensils since there is no captain. Eijaz starts washing the dishes instead of her. A war of words starts between Eijaz and Nikki. Eijaz says that this is a small industry, and her attitude won't let her get far.

Later, Rahul advice Eijaz to fight with a credible person to have some credibility.

(The above story first appeared on LatestLY on Nov 19, 2020 12:00 AM IST. For more news and updates on politics, world, sports, entertainment and lifestyle, log on to our website latestly.com).