Breathe Into The Shadows Teaser: Abhishek Bachchan Goes On a Search Of 'The Kidnapper' of His Daughter (Watch Video) 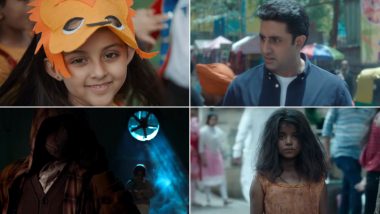 Grabs from the Breathe Into The Shadows teaser (Photo Credits: YouTube)

The fans have been waiting for the second season of R Madhavan starrer Breathe that streamed on Amazon Prime. The second season 'Breathe: Into The Shadows' is here but with a different cast. It stars Abhishek Bachchan and Nithya Menen in the lead. The new teaser that just dropped is equally intriguing. In fact, the fans will get to watch Junior B after a long time, that too on a new platform. The pairing also looks fresh. Breathe Into The Shadows Teaser: Amit Sadh's Dark Side Adds an Interesting Twist to the Storyline (Watch Video).

In the teaser video, we see Nithya and Abhishek as doting and happy parents to their little daughter, Siya. However, their life turns upside down after she gets kidnapped. The name of the teaser is also 'The Kidnapper.' Abhishek is seen frantically searching Siya everywhere until the kidnapper calls him. He demands to connect with him his daughter who is abducted and kept in a dark room. The identity of the kidnapper was not revealed here. Check out the teaser below.

The trailer of this Mayank Sharma directed suspense drama will release on July 1. The episodes are been written by Bhavani Iyer, Vikram Tuli, Arshad Syed and Mayank Sharma. It also stars Amit Sadh and Saiyam Kher in crucial roles. How did you find the teaser? Do let us know in the comments sections below.

(The above story first appeared on LatestLY on Jun 29, 2020 12:46 PM IST. For more news and updates on politics, world, sports, entertainment and lifestyle, log on to our website latestly.com).