Criminal on Netflix: Kit Harrington's Return after Game of Thrones, Kunal Nayyar's Inclusion - The Reason to Get Excited for this Web Series are Aplenty (Watch Trailer)

Netflix is gearing up for season two of Criminal that has a promising star cast of Kit Harrington, Kunal Nayyar, Sharon Horgan and Sophie Okonedo. 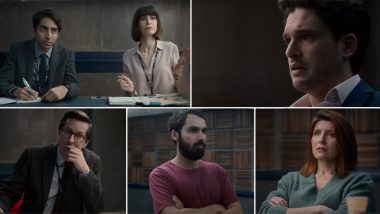 Netflix is gearing up for season two of Criminal that has a promising star cast of Kit Harrington, Kunal Nayyar, Sharon Horgan and Sophie Okonedo this time. Its trailer was unveiled on September 2 and going by the premise, it follows the police officials investigating their four new suspects. Besides having an English version of this crime drama, the series also has its French, Spanish and German versions which are equally promising and intriguing. Netflix's New Film The Last Days Of American Crime Lands 0% Rating On Rotten Tomatoes With Scathing Reviews.

While we knew Kit Harrington is already on board for Marvel's next multi-starrer, Eternals, this upcoming Netflix series will see him return to television after Game of Thrones. Harrington took a break of some sorts to finalise his next small-screen project and we are glad for her prefered a zone that's completely different from his previous outing. Big Bang Theory actor, Kunal Nayyar also stars as one of the suspects in season 2 and his addition should prompt your excitement even more. Netflix India Blurs Scenes of Cooked Pork From Vikings; Check Out The Platform's Reply To Twitter User Who Pointed out this Self-Censorship!

You Can Watch the Trailer Here

Criminal season 2 will focus on police interrogation between the officials and their different suspects. It's bound to keep you thinking while also inducing some mental conflict. The star cast of season one, Nicholas Pinnock, Katherine Kelly, Lee Ingleby, Mark Stanley, Rochenda Sandall and Shubham Saraf will return for this new season. Criminal season 2 on Netflix will start streaming on September 16.

(The above story first appeared on LatestLY on Sep 03, 2020 12:08 PM IST. For more news and updates on politics, world, sports, entertainment and lifestyle, log on to our website latestly.com).