To the delight of the fans, Disha Vakani who plays 'Daya Gada' might return, as hinted by co-star Jennifer Mistry Bansiwal. 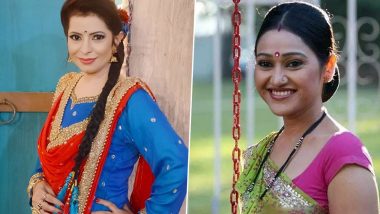 Taarak Mehta Ka Ooltah Chashmah fans are right now over the moon as the new episodes of the show have started airing on Sab TV. After watching the re-run and enjoying them for months together during lockdown, the fans are now eager to see what unfolds in the fresh episodes. Amid this, several reports of actors playing the main characters quitting are doing the rounds. But to the delight of the fans, Disha Vakani who plays 'Daya Gada' might return, as hinted by co-star Jennifer Mistry Bansiwal. Taarak Mehta Ka Ooltah Chashmah: After Disha Vakani, Neha Mehta aka Anjali to Quit the Show?.

Jennifer who plays Mrs Roshan Sodhi on the show shared her thoughts on sharing the screen space with Disha. In her chat with TOI, she revealed that she misses Disha a lot on the sets but also understands that her daughter 'Stuti' and her family is her priority right now. But she also further added, "I am sure she will be back soon. She's just enjoying her family life and we should let her be like that." So, all hopes are not lost for the fans of the garba queen!

Last month, there were also reports that makers are planning to celebrate 12 years of TMKOC with a special episode. It was also said that Disha might return for this special episode. However, producer Asit Kumar Modi told pinkvilla.com, "Let the shoot resume first, there is no point commenting or discussing this right now. This is not the proper time to speak about what will happen and just speaking for the heck of it because we are all still figuring out a systematic way to first begin the shoot." Well, as of now the fans could be rejoicing at the mere possibility of the actress joining the show.

(The above story first appeared on LatestLY on Jul 30, 2020 05:07 PM IST. For more news and updates on politics, world, sports, entertainment and lifestyle, log on to our website latestly.com).