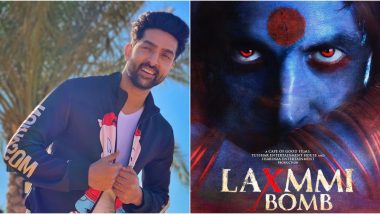 Television actor Adhvik Mahajan is on cloud nine these days as he has been receiving positive reviews for his short film, Tamas. The most interesting part about the movie is that it's been shot on an IPhone and is written and directed by Mahajan himself. Starring Rashami Desai opposite Adhvik, the film taps upon the current issues like Islamophobia, suicidal thoughts and much more. While the actor's attempt is lauded by many celebs and critics out there, over a past few days, there have been reports claiming that Adhvik will be next seen in Akshay Kumar-starrer Laxmmi Bomb. Well, now in an exclusive conversation with us the TV star has confirmed the said rumours. Tamas: Rashami Desai Shares The First Glimpse of Her Upcoming Project With Adhvik Mahajan (View Pic).

When Mahajan was quizzed if his next is Laxmmi Bomb, he replied with an affirmative answer. "I’ll not lie, yes I’m part of Akshay Kumar’s Laxmmi Bomb. However, will not be able to reveal more information about it as the makers will make it official soon. But, yes you’ll see me in Laxmmi Bomb."

For the unversed, earlier rumours had it that Adhvik is soon to make his Bollywood comeback with the Akshay Kumar starrer and will be playing a negative role in the same. Well, now as the Tamas star has confirmed the development atleast his fans can breathe a sigh of relief. Tamas Short Film Review: Rashami Desai and Adhvik Mahajan's Lockdown Film Is Weak but Gets an A for Effort.

Adhvik Mahajan is not new to Bollywood. Though popularly known to part of television's daily soap like Divya Dristi, Naagin and Bani - Ishq Da Kalma, he had made his B-town debut with 2008 film, Contract. He has also been part of a South film. Coming back to Adhvik's stint in Laxmmi Bomb, we can't wait for the movie to release on Disney Plus Hotstar. Stay tuned!

(The above story first appeared on LatestLY on Jul 11, 2020 03:09 PM IST. For more news and updates on politics, world, sports, entertainment and lifestyle, log on to our website latestly.com).