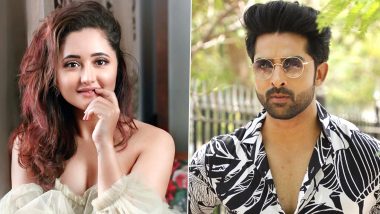 Rashami Desai became a household name with her portrayal as Tapasya in Uttaran and Shorvori in Dil Se Dil Tak. Recently, she also participated in one of the most loved controversial reality show, Bigg Boss 13 and flashed the real side for her personality to the world. On the show, she also got tagged as a 'strong woman' for fighting her personal and professional battles on national television like a boss. Post BB 13, her fans have been eagerly waiting for the actress to let one and all know what's next career-wise. Well, looks like finally, the cat is out of the bag, as Rashami recently took to her social media and shared a glimpse from her upcoming project. Rashami Desai Supports Indian Government’s Decision to Ban 59 Chinese Apps, Urges Fans to Stand United (Watch Video).

Titled as 'Tamas', Desai in her next project is paired opposite TV actor Adhvik Mahajan. For the unversed, Adhvik is a popular face from television and has worked in serials like Divya Drishti, Meri Durga and Bani - Ishq Da Kalma. In the poster, while Rashami looks desi in a white traditional attire along with silver earrings, on the other hand, Adhvik looks dapper in a shirt. Another thing to notice is that how Desai's side in the poster is colourful and she can be seen smiling whereas Mahajan's side is dark and sees him in a confused state. Bigg Boss 13 Star Rashami Desai Joins Naagin 4 on Holi (Watch Video).

Check Out The Poster Shared By Rashami Desai Below:

From the time the poster of 'Tamas' dropped online, fans are going gaga over the same. However, just like us even fans are unclear whether the glimpse is from a web-series, song or a short film. Well, the answer to this will be out soon, as 'Tamas' is all set to release on July 7, 2020. Stay tuned!

(The above story first appeared on LatestLY on Jul 01, 2020 01:32 PM IST. For more news and updates on politics, world, sports, entertainment and lifestyle, log on to our website latestly.com).