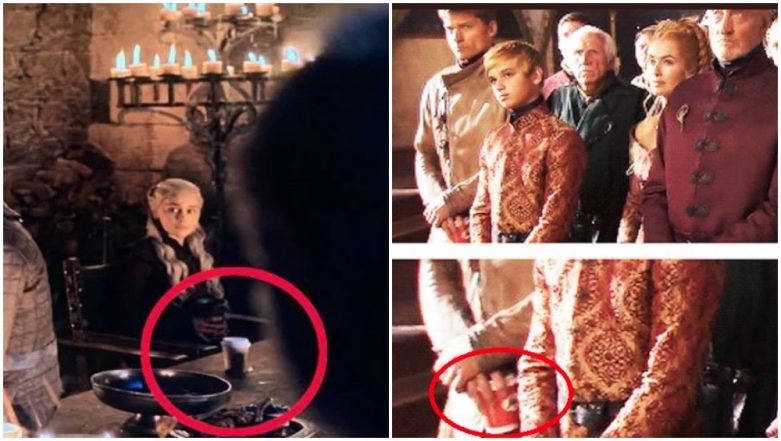 The biggest talking point of 'The Last of the Starks' the fourth episode of Game of Thrones season 8 was not the death of Missandei. Nor that of the unexpected killing of Daenerys' dragon, Rhaegal by Euron Greyjoy. Jon Snow not giving a single pat to his direwolf, Ghost, before they bid farewell, had riled up some of the Game of Thrones fans. But the thing that bothered most of the viewers was an appearance of a Starbucks coffee cup in a show that is set in a medieval fictional kingdom. Game of Thrones 8 Episode 4: Daenerys Targaryen Gets Starbucks in Winterfell; Internet Is in Splits Over GoT Goof Up.

The blooper appeared during the feast see, where eagle-eyed viewers spotted the Starbucks cup in front of Daenerys. When the issue became too hot to handle, even HBO had to apologise for the mistake.

Not happy with the apology, some of the GoT fans went even further to look if the previous seasons had similar bloopers. And guess what? Some of them found a few pics where Jaime Lannister (Nikolaj Coster-Waldau) was seen holding a coffee cup.

Last night’s episode was not the first to contain a #Starbucks easter egg. Check this out from earlier in the series. Jaime Lannister has both hands in this scene AND a coffee cup.#GameofThrones pic.twitter.com/WPrF6xwhCZ

This picture was taken from Season 4, during the shoot of the infamous Purple Wedding episode. It is taking during the wedding of Joffrey to Margaery Tyrell, with Jaime, Cersei, Tyrion, Sansa, Tywin, et al present in the front row.

While the above picture, certainly looked like a blooper, this is not entirely the truth. The picture is genuine, alright and Jaime may be holding a coffee cup in his hand. But the above picture is taken during the making video and the coffee cup doesn't appear in the final episode. Why, Jaime is also seen in a different costume altogether. Watch the video below if you don't believe us:

If you are lazy enough to go and check the above video, we have even pasted the screenshot below that shows Jaime in the wedding scene.

As you can clearly see, there is no coffee cup in the above scene. So dear Game of Thrones fans, let's not troll the makers for something that has been present in the BTS-making video. As for the 'The Last of the Starks' episode fiasco, well, trolling is inevitable in that case!