Hamilton on Disney+ Hotstar Review: Critics Are All-Praise for This Broadway Musical on OTT Platform 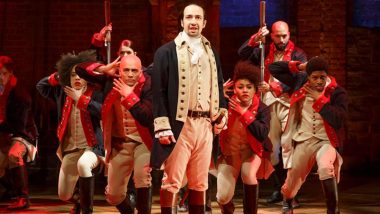 The extremely popular broadway show, Hamilton, has arrived on Disney+ Hotstar, in a bold redefining move. Can we now expect to enjoy most of the popular Broadway shows from the comfort of our homes? Well, the praises that Hamilton is raking in surely has paved the path for more of this to happen. Hamilton, a musical about Alexander Hamilton, one of the Founding Fathers of America, dropped on the streaming platform on the 4th of July. It is not a boring rendition of a politically charged story. This adaptation has swag. Disney's 'Hamilton' Movie Is a Gift to Broadway Fans Says Producer-Actor Lin-Manuel Miranda.

Hamilton is an adaptation of Miranda of Ron Chernow's 2004 book Alexander Hamilton. Hamilton was filmed by the director, Thomas Kail, and the cinematographer Declan Quinn in the Richard Rodgers Theater in June 2016, in front of a live audience.  Let us have a look at what the critics are saying about this pioneering project that decided to change the way we stream content.

Republic wrote, "Lin Manuel-Miranda’s theatrical magnum opus connects the most due to its sense of optimism. It’s not just the performances that stir emotions within or the songs that reference literature and music – it is the narrative, that is not a documentary of the man per se, but speaks of his optimism to break the wheel and see a new world of freedom." Hamilton Trailer: Lin-Manuel Miranda's Broadway Musical Re-telling American History Hip-Hop Style is All Set to Stream on Disney Plus on July 3.

The Indian Express wrote, "...the two hours forty minutes slide away without an effort, as you listen to the songs belted out with such sincerity, you see the cast sweating, heaving and panting as they perform with electrifying energy."

The Quint appreciated the play for not withholding Hamilton's flaws as a human. "Even though the focal point of the play is Hamilton’s work as a Founding Father and the legacy he left behind, the play does not idealise him. His flaws (he has many) and his virtues are both presented in equal depth," they wrote.

The Hindu wrote that the winning stroke "lies in the writing of the play that oscillates between humour, personal tragedy, political power play, parallel story arcs and multiple shifts in moods; not to mention, a largely black-brown cast that works together to subvert all conventional notions of narrating history."

Evening Standard's Charlotte O'Sullivan summed up the experience by writing, "The two most frequently asked questions about this film-of-the-live-show can’t be answered by a single critic. Does what we see do justice to the live show? Will first-timers enjoy it? As a first-timer, let me just say: if I could have given this six stars, I would’ve.

Hamilton has barely received any negative reviews from the critics. It certainly sounds like the content you should be gladly investing your time in.

(The above story first appeared on LatestLY on Jul 03, 2020 09:14 PM IST. For more news and updates on politics, world, sports, entertainment and lifestyle, log on to our website latestly.com).