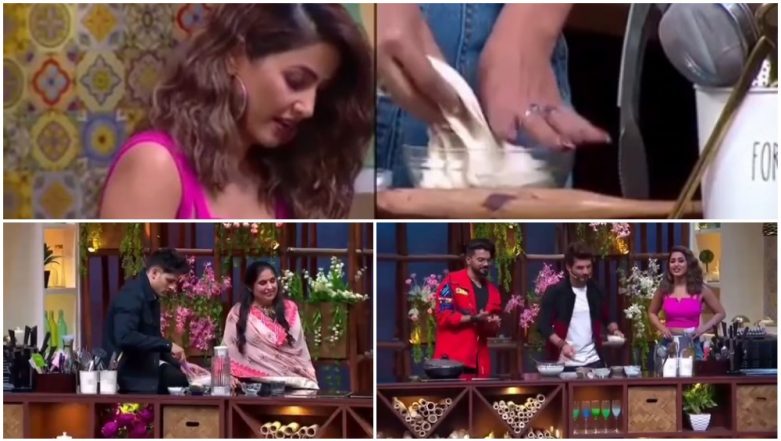 Hina Khan, who is currently seen in Ekta Kapoor's Kasautii Zindagii Kay 2, is one of the top trending actors of the Television industry. The actress enjoys a huge fan following of 4.4 million on Instagram. She is an avid social media user and misses no chance of updating herself well on social networking sites. Well, recently, the actress visited the sets of Arjun Bijlani’s show Kitchen Champion with beau Rocky Jaiswal. The show also saw Hina's BFF Priyank Sharma and his mother on the show. Hina, who shot for an episode of Kitchen Champion, became a butt of jokes on the show and here's why! Hina Khan’s Hot Pink Avatar Will Keep Your Monday Blues at Bay – View Pics

Hosted by Arjun, Kitchen Champion is a one of a kind show that presents a cook-off between celebrities. The channel recently released a promo where we can see that Hina has been challenged to make a round roti. While the actress seems quite confident as she says that she will nail this 'round roti' challenge but however, she fails to do so. In fact, the diva, who said 'Itna toh kar hee sakti hoon main' (I can of course do this bit and it's not a big deal) made some weirdly shaped roti, which was everything but round. Actually, to be honest, it looked like a 'kaccha' (underwear) like Arjun Bijlani is seen saying in the video. Not only Arjun but Priyank too did not miss the chance to troll her for that.

Speaking of Hina's attire, the actress, who has a knack for dressing and looking sexy without taking efforts, can be seen donning a sassy look; She has sported a hot pink crop top with a blue denim skirt. The hottie rounded up her look with some white hoop earrings, voluminous curls and a pair of high heels.

On the professional front, Hina Khan, who is currently seen essaying the role of the vamp character of Komolika in Ekta Kapoor's popular show Kasautii Zindagii Kay 2, is gearing up to make her Bollywood debut in a film, where she will be seen sharing the screen space with veteran actor Farida Jalal. Hina has also bagged Ekta Kapoor’s another project apart from KZK 2. Watch this space for more scoop and updates!