In the latest promo of Khatron Ke Khiladi Season 10, host Rohit Shetty can be seen severely admonishing contestant Tejasswi Prakash, and threatening to throw her out of the show. This is because Tejasswi accused him of favouritism. 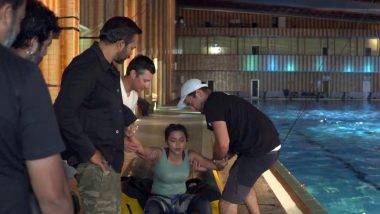 In the latest promo of Khatron Ke Khiladi Season 10, host Rohit Shetty can be seen severely admonishing contestant Tejasswi Prakash, and threatening to throw her out of the show. This is because Tejasswi accused him of favouritism. In the promo, after Tejasswi alleges favouritism, Rohit Shetty reacts saying: "Don't cross your limit. I've not reached here by roaming around with my car. I've worked hard to reach here. You have to respect that. I will throw you out of the show." However, Tejasswi, who has quite a fan-following among the audience, received support on Twitter. Adaa Khan on Her Khatron Ke Khiladi 10 Stint: ‘My Family is Surprised as They Always Thought I Am Too Fragile to Handle All This’

Reacting to the promo, one fan wrote: "Hope it's just a prank only, and why #TejasswiPrakash have to leave the show she is performing better than others #KKK10." Another fan commented: "She is correct if she is taking a stand against favouritism. Stunts should be fair to everyone #TejasswiPrakash #KhatronKeKhiladi10 #KKK10." Another fan expressed: "No offence to other contestants but I agree with #TejasswiPrakash when there is no elimination what is the need of that dangerous wax stunt anybody who was in her place will react like that only and yeah she will not go anytime soon." Khatron Ke Khiladi 10 First Episode Review: Karan Patel, Karishma Tanna, Adaa Khan, Amruta Khanvilkar and Others Face Their Phobias Like a Boss!

Will #TejasswiPrakash have to leave the show? Tune in this Sat-Sun to #KKK10 at 9 PM to find out.

Meanwhile, this week's tasks have been designed to test contestants both individually and as team players. Contestants will be divided into two teams, with one team receiving an extra advantage. A showdown between captains Karan Patel and Tejasswi Prakash will irk Rohit Shetty and he will lose his calm. Rohit will also ask captain Tejasswi Prakash to back off. Will this go down well with Tejasswi's fans or will they voice protest on social media? Time can tell!

(The above story first appeared on LatestLY on Mar 13, 2020 04:32 PM IST. For more news and updates on politics, world, sports, entertainment and lifestyle, log on to our website latestly.com).