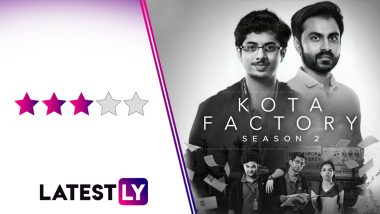 Kota Factory Season 2 Review: At the end of season 1 of TVF's very popular (and rightly so) Kota Factory, Vaibhav (Mayur More) has managed to get into Maheshwari classes. The number 1 IIT coaching class in Kota, Maheshwari had rejected his admission in the beginning, so his selection there in the final episode was a victory for our young protagonist. Shot in black-n-white frames (to signify the lack of colour in the lives of the students there), the final scene of Kota Factory season 1 sees colour return to Vaibhav's life as he welcomes his new bunkmate in Maheshwari. Kota Factory 2 Review: Jitendra Kumar, Ahsaas Channa’s Show Declared ‘Inspirational and Motivational’ by Netizens.

That colour persists when the season 2 of Kota Factory returns, as Vaibhav and his new friend Sushrut (Vaibhav Thakkar) attend the induction ceremony at Maheshwari. However, its owner Maheshwari Sir (Sameer Saxena) gives a stinging speech that not only burts their optimistic bubble, but also loses the newly gained colours out of their lives, and the frames.

Kota Factory 2 sees Vaibhav struggle with coping up with super-achievers of his new academy, a tougher challenge compared to when he was in the cream of the toppers in his previous coaching class, Prodigy.

Meanwhile, the situation of his friends back at Prodigy ain't that good. Their fave teacher and mentor Jeetu Bhaiya (Jitendra Kumar) has left Prodigy, and his replacement isn't even from IIT.

As the students try to cope with increasing pressure, maddening competition, raging hormones, failing health among other things, Jeetu Bhaiya has to put up with struggles of launching his own coaching class, while also being there for those who need him.

Kota Factory 2 starts off really well, from the aforementioned induction lecture to Vaibhav trying to fit himself in a class that has his peers act like well-oiled machinery. The allegories and the parallels (the teachers of Maheshwari using their laptops to check results in a way as if they are into stock-trading is both comical and ironical) persists to be terrific, though at times they come off heavy-handed, like the multiple visuals of a chimney of a factory spewing black smoke.

Like with the season, the black and white frames continue to be enchanting even in its supposed dullness., with excellent camerawork and lovely overhead shots. The performances remain top notch as always, be it the terrific Jitendra Kumar as the teacher we wish we had, to the students. Vaibhav More, Ahsaas Channa (Shivangi), Alam Khan (Uday), Revathi Pillai (Vartika), Ranjan Raj (Balmukund Meena), Urvi Singh (Meenal), and the newcomer Vaibhav Thakkar are absolutely brilliant in their roles. Rajesh Sharma, famed for playing Roshesh Sarabhai in Sarabhai vs Sarabhai, leaves an impact as a professor Jeetu Bhaiya is looking to hire (is it me or did he remind you of a middle-aged Rishi Kapoor?). Kota Factory 2 Teaser: TVF’s Popular Series Is Back With a New Journey of IIT Students; To Release on Netflix on September 24.

As you know, what made the first Kota Factory so good was the moments that do leave an impact on you, that is about perception changing. The season 2 doesn't lack in them. Be it Jeetu Bhaiya insisting on the need to have a female teacher so that girl IIT aspirants don't feel let out (coming as a subtle contrast to Maheshwari's opening speech that is very male-centric), or that scene with Vartika and Vaibhav after their first date - Kota Factory 2 has winsome scenes.

And yet, why is it that the news season feels quite a bit lacking? It feels like the second season of Stranger Things in terms of meeting expectations - Kota Factory 2 is polished, ambitious and effective, but feels clunky and less impactful compared to its predecessor. The series rather focuses on giving a character an inspiring monologue, even it is clunkily placed, than helping it have a better arc. The season dips from episode 3 onwards when it comes to writing, not really getting into a direction it needs to go. Jeetu Bhaiya, who was far more effective when used in smaller doses in season 2, felt restricted and strangely, repetitive, even after getting his own subplot. Which in turn, along with Vaibhav's storyline, doesn't give other characters enough room to breathe, like Meenal, Vartika and even the scene-stealing Shivangi. They get their moments, but they don't evolve in the latter episodes, which is strange for a season that insisted on the importance of highlights the lack of attention given to female IIT aspirants. Even Vaibhav and Vartika's love story doesn't get better after that cutesy first date.

The biggest criticism that Kota Factory has faced as a show is that it still tries to promote the terrible rat race the Kota culture has relished in for a while. While it addresses the hardships the student goes through in the town, the general attitude is that 'hey, we know the system is broken. So let's live with it, and work things around!'. The new season fares no different, but hopefully the final scene might be a push that needed for the show to reevaluate its stand in the upcoming seasons. At least, one good thing that Kota Factory 2 did was to get rid of those in-show promotions of an online class!

- The Making, The Moments and The Performances

- The Writing Falters in the Second Half

Yes, Kota Factory 2 did disappoint me as a weaker followup of a far stronger first outing. Yet, there are still some consistent strong positives, like the making, the fantastic performances and some really feel-good moments that continue to be winsome. Kota Factory 2 is streaming on Netflix.

(The above story first appeared on LatestLY on Sep 25, 2021 08:11 PM IST. For more news and updates on politics, world, sports, entertainment and lifestyle, log on to our website latestly.com).