On the occasion of Kunal Nayyar's birthday, join us in wishing this amazingly talented actor Many Many Happy Returns of the Day. Hope to see him in more diverse roles that could help him in breaking out of the geeky Indian mould. 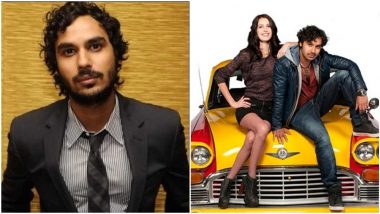 Should we be surprised that two of The Big Bang Theory cast-mates share the same birthday, so close they were as a gang? Both Kunal Nayyar, who plays Indian astrophysicist Rajesh Koothrappali, and Johnny Galecki (Leonard Hofstadter) share the same birthday - April 30, and Leonard could have nearly ended up being Rajesh's brother-in-law, if a certain infidelity didn't happen! Speaking more about Kunal Nayyar, of course, The Big Bang Theory was the show that made him a household name. The Big Bang Theory Finale Review: 10 Moments of Sheldon Cooper and Gang That Gave the Popular Sitcom Such a Lovely Conclusion!

And in between acting in this popular series, Kunal had also been a part of a few movies. One such movie was Dr Cabbie, a 2014 Indo-American production that had Vinay Virmani (Breakaway, David) as the lead. In the film, Kunal played Tony, the crude, streetsmart friend of the protagonist, who is a medical student working as a cabbie in Canada.

Watch the Trailer Below:

In case you are wondering what Salman Khan is doing in the trailer, Dr Cabbie is Salman's first crossover production. Which is also the reason why Katrina Kaif's younger sister, Isabelle Kaif, also had a role in the film, that of Kunal Nayyar's love interest. Aaye Haaye Song From Time to Dance: Sooraj Pancholi, Isabelle Kaif Groove to Vishal Mishra’s Groovy Beats.

Interestingly Vinay Virmani, the son of a Canadian business tycoon, had Akshay Kumar as the co-producer for his first movie Breakaway. Akshay had even appeared in a music video of the song "Shera Di Kaum" played during the end-credits of the film. Did Akshay Kumar Really Not Visit Canada in the Past Seven Years As He Claims? This Old News Says Otherwise!

Speaking of Kunal, the actor got a lot of appreciation for his comic timing in the film, though Dr Cabbie itself got only average reviews. But Kunal went on to rise more and more in fame with TBBT. After the show ended, Kunal surprised the hell out of us with his deadly turn in the Netflix show, Criminal: UK, where he appeared in the last episode of the second season as a convicted murderer. Criminal UK Season 2 Review: Ranking All Four Episodes of Kit Harington, Kunal Nayyar Netflix Series From Good to Great!

On the occasion of Kunal Nayyar's birthday, join us in wishing this amazingly talented actor Many Many Happy Returns of the Day. Hope to see him in more diverse roles that could help him in breaking out of the geeky Indian mould.

(The above story first appeared on LatestLY on Apr 30, 2021 10:11 AM IST. For more news and updates on politics, world, sports, entertainment and lifestyle, log on to our website latestly.com).