Film actor, director and screenwriter Farhan Akhtar gets nostalgic about his film Lakshya on the show Mission Frontline. 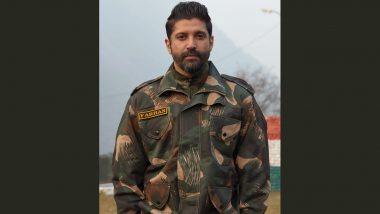 Film actor, director and screenwriter Farhan Akhtar gets nostalgic about his film Lakshya on the show Mission Frontline. Farhan interacts with Col Bheemaiah P.S. (Commanding officer, 3 Rashtriya Rifle Sena Medal Bar). Filmmaker Rohit Shetty and Farhan Akhtar will be seen together on the show. Both will be spending a day with the Rashtriya Rifle soldiers and J&K Police's Special Operations Group in Srinagar. Mission Frontline: Rohit Shetty and Farhan Akhtar to Feature in Action-Packed Discovery Plus’ Series.

Farhan will be undergoing vigorous weapon training including static firing, neutralising terrorists in the jungle, along with a search and destroy drill with Rashtriya Rifles. While interacting with Col Bheemaiah P.S., Farhan gets nostalgic about his film Lakshya. He says: "2003 is when we shot 'Lakshya' so before that I spent a lot of time in Ladakh mainly but now when I am here, I really feel very nostalgic about it. The time that we spent because you became a family and I think of them dearly today and I miss them a lot." Farhan Akhtar Shares Happy Family Photo on Father Javed Akhtar’s 77th Birthday Featuring Shabana Azmi, Ex-Wife Honey Irani and Kids.

Farhan on weapon handling and firing training said: "Every time you hold this weapon in your hand, it definitely does something to you. When you know the reason behind using this weapon and also in what situation, it fills you with a sense of responsibility." Farhan also opens up on what amazed him during the rigorous drills and said, "From training with them, to being their buddy, to sharing stories, I've learned this one thing. It is difficult to sum up the life of a soldier in words. I had to live a day in their life. It's a day that is going to become a part of my stories."

He also said: "I have had an exceptionally interesting experience and I'm really glad I got to do this. It really opened my mind". Mission Frontline will be starting from January 20 on discovery+.

(The above story first appeared on LatestLY on Jan 19, 2022 03:46 PM IST. For more news and updates on politics, world, sports, entertainment and lifestyle, log on to our website latestly.com).