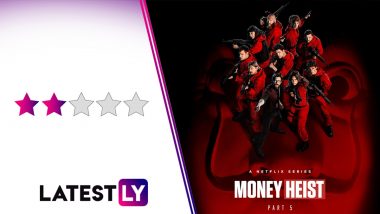 Money Heist Series 5 Review: Netflix’s premium heist show has finally come to an end. Money Heist took over the streaming service by a storm during its initial release and since then every season has been met with great excitement. So has been the case with series 5, which just had its final five episodes drop and with it the show ends. So does it give a satisfying ending? Well not really. Money Heist Season 5 Volume 2 Review: Fans Cry Happy Tears After the Last Showdown on Netflix’s Hit Spanish Drama (View Tweets).

Money Heist Series 5 Part 2 picks up right after the ending of Part 1 naturally. Majority of the group is mourning Tokyo’s death while the Professor is having to deal with his own demons. These last five episodes bring a close to the show and heavily focus on the group trying to make it out while Tamayo breathes down on their necks.

Money Heist still floors me with its production values. Everything looks amazing and extremely high budget to a point where it doesn’t look like a show at all. It is quite impressive just how high the production values for this is on a TV budget. The action is amazingly framed and provides a great sense of rush.

Coming to the cast too, The Professor again proves to be the only most sensible character out of everyone. Alvaro Morte has consistently been one of my favorite parts about this show and I think he portrays this character wonderfully. He feels the most human out of everyone and has actual emotions that dictate his decisions. That alone makes him a character worth rooting for. It is what makes the Professor so enjoyable to watch on screen.

But not all characters are as good as him. This is a problem that I have had with the show consistently and over here it even feels used to a greater effect. Each character feels like they have been pulled out of a cartoon show. They are so over the top that they directly feel like they clash with the tone. There is a new character introduced here very early on in episode six, and his entire deal is having seven children with seven women, and the way he is introduced is just so… bad. I couldn’t care much about it and it just made everything seem so cringey.

This problem is also apparent with so many of the main characters. All of them just feel like caricatures. There isn’t much to them. It conflicts with the tone so much and the few characters that are quote on quote the good guys, they just feel so boring. The one interesting character that they had in Tokyo is also gone, so there really isn’t much to chew on here. Money Heist: Netflix To Expand The Heist Universe, Announces A Spin-Off Series Titled Berlin (View Post).

Even with the story, I couldn’t care much. Money Heist took me from one set piece to another while soap-opera like beats were splintered through the action. By the time the end came I was just happy that this would be the last I would be seeing of this show on my socials. Also this had some major pacing issues where at times I just felt there is nothing going on in the background and a lot of it is being padded out.

Money Heist ends dropping a deuce and honestly it is not all so surprising. While long time viewers will find enjoyment in how it all wraps up, it still doesn’t do much. If anything, writing this felt cathartic knowing that I won’t be seeing Bella Ciao being constantly spammed on my Instagram stories.

(The above story first appeared on LatestLY on Dec 04, 2021 02:31 PM IST. For more news and updates on politics, world, sports, entertainment and lifestyle, log on to our website latestly.com).