Never Have I Ever Season 3 Review: Maitreyi Ramakrishnan's Netflix Teen Series Surprisingly Manages To Be Most Inferior Of All Seasons (LatestLY Exclusive)

The third season of Never Have I Ever is here and we aren't sure why. The plot doesn't have any highs and is painfully predictable. The series stars Maitreyi Ramakrishnan, Poorna Jagannathan, Darren Barnet, and Jaren Lewison and is created by Miny Kaling along with Lang Fisher. Never Have I Ever Season 3 streams on Netflix. 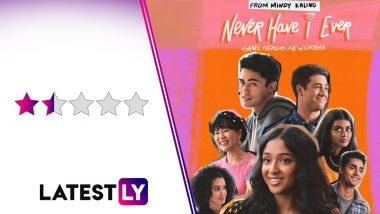 Never Have I Ever season 3 review

Never Have I Ever season 3 review: This season of Netflix's teen comedy series Never Have I Ever is a classic example of a video meeting that could have been an email. While the first was a stereotypical Indian crossover cliche, the second just cruised ahead with first-world teenage problems. But the third season is just not required. Mindy Kaling could have just tweeted the story as a 150-character post. That would have been funnier, I feel. Never Have I Ever Actor Darren Barnet Calls Shah Rukh Khan A Mix Of Brad Pitt And Tom Cruise (Watch Video).

Devi (Maitreyi Ramakrishnan) starts the season by being in a committed relationship with Paxton (Darren Barnet) but feels he is out of her league. So she creates situations which get difficult for Paxton to deal with and they break up. That leads Devi to look for boyfriends and find Nirdesh (Anirudh Pisharody), a nerdy hot son of her mother Nalini Vishwakumar's (Purna Jagannathan) newly-minted friend. Rest is the usual teenage drama that this kind of series always shows.

Getting to the good parts which are so far and few, it's good to hear Andy Samberg as Ben Gross' (Jaren Lewison) POV voice. He retains the Jake Peralta voice modulations and those are the best bits of this series. So damn NOICE! Whoever is writing Eleanor's character deserves a standing ovation. The way she simplifies the craziest life issues is so refreshing. Honestly, we all need an Eleanor in our lives just to show us a side we never even consider. Hear this: Devi dating the most popular guy in school Paxton earns her an anonymous DM where someone is warning her about him. While Devi is antsy and paranoid about it, Eleanor simply explains it as a measure of Devi's rising popularity that now she has haters and trolls. Yea, sounds a bit disturbing to hear young girls taking trolls as a measure of popularity but trust me, the way Ramona Young says it, is hilarious.

Now coming to the long list of things the series annoyed me with. So a few things that worked in the previous seasons are the familiar vibe of an NRI family, how they navigate High School in the US, the POV voiceovers, some great funny one-liners, getting updated on Gen-Z lingos (remember 'Hilare' in the last season?) and some typical Indian behaviour. All of that is lost in this season. This third one seems so rushed and without merit. It is just an endless charade of people moving from one partner to another and wallowing in self-pity. It made me wonder why were teenage years so devoid of drama in my case.

Even though it was pure tokenism, the second season at least tried to present a few issues plaguing the teenagers like eating disorders, the shallow dependency on looks all the time and more. This one is just happy being an ordinary teenage drama. The only thing it retains is the painfully dull Paxton Vs Ben with the new addition of Nirdesh in the mix. That wasn't even the best part of the previous season. What's hurtful is that Poorna's Nalini has lost all her snappy comebacks which made her such a perfect Indian mother in the last seasons.

Here's some advice for the writers for the next season. Make it more about Ben and how he is trying to have a better life rather than getting drowned in his obsession to score an Ivy League seat despite being a topper. He has started to look up from his books and is bonding with Paxton of all people. That would be so educational on why you don't have to be a dork to get into a prestigious college. Never Have I Ever Season 2 Review: Maitreyi Ramakrishnan's Netflix Teen Comedy Series Goes From Being Oddly Addictive To Excruciatingly Long (LatestLY Exclusive).

Watch the trailer of Never Have I Ever

Performances are just about okay with Ramona Young walking away with the crown. Young's Eleanor makes every scene worth watching and the series bearable. Maitreyi Ramakrishnan is good as Devi but there's no new dimension to her character. So it's all the same. Darren Barnet continues to smoulder-act while Jaren Lewison has his moments.

-No new highs to enjoy

-no jokes to crack up on

In a scene, Paxton shares about dating someone who is 'easy and fun and doesn't make my burn hurt'. That's what I expected the third season of Never Have I Ever to be, but sadly, it's disappointing. Never Have I Ever Season 3 streams on Netflix.

(The above story first appeared on LatestLY on Aug 12, 2022 08:52 PM IST. For more news and updates on politics, world, sports, entertainment and lifestyle, log on to our website latestly.com).