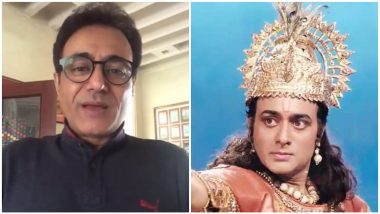 The hit 90s TV show, Mahabharat, made a smashing return to the TV. DD National retired the show as majority of the Indian population is locked in their houses during the COVID-19 outbreak. But here is one more reason for the fans of the show to be happy other than its rerun. Nitish Bharadwaj, the actor who played the role of Lord Krishna, in the mythological show, has joined a few social media platforms. The actor was previously only on Facebook. But now coinciding with his show's return, he joined Instagram and Twitter as well. Mahabharat Returns to TV: Nitish Bharadwaj, Puneet Issar And Other Cast Members Recall What They Learnt While Shooting For the Mythological Show.

The actor turned politician has been posting on videos on Instagram about Mahabharat, along with long-detailed captions. He calls his fans his online family. At the moment, his Twitter handle is all about Mahabharat. BTW, the actor has also launched his YouTube page. How cool is that? Mahabharat Trivia: Did You Know That Juhi Chawla Was Roped In To Play Draupadi, But She Chose This Movie Instead?.

On Twitter, he reshared the airing time of Mahabharat:

Nitish's unverified Twitter handle has over 3,500 followers at the moment. His Instagram page has over 1500 followers. We are sure his following will see a surge in the coming days.

To think that Nitish had initially refused to play the role of Krishna in Mahabharat. The actor opened up about the incident in an interview with Hindustan Times. He revealed that he was the first cast as Vidur on the show. Producer Ravi Chopra said that he was only going to play the role for a couple of episodes as he was too young. Soon, he was offered another role in the series, twins Nakul and Sahdev. But he turned it down saying he wanted to play Abhimanyu.

The opportunity came knocking on his door the third time when the producer offered the actor to play Krishna. But Nitish refused to audition and dodged Chopra however possible as he felt he could not do justice to the role. Finally, BR Chopra caught hold of the actor during a shoot of a film and urged him to screentest. He was cast in the role and the rest is history.

(The above story first appeared on LatestLY on Apr 03, 2020 10:55 PM IST. For more news and updates on politics, world, sports, entertainment and lifestyle, log on to our website latestly.com).