Tamannaah Bhatia plays an ethical hacker in the upcoming series November Story, and she feels the project helped her explore creative nuances. November Story releases on May 20 in Hindi, Tamil and Telugu on Disney+ Hotstar VIP. 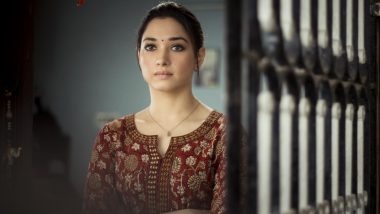 Tamannaah plays Anuradha, and she feels it is a character that stands out among all others she has portrayed so far. "November Story equipped me with the flair to explore novel creative nuances. The script, the storyline and Ram Subramanian's direction to a great extent leveraged my on-screen depiction of Anuradha, a young ethical hacker who rises to the occasion when it comes to saving her father from being punished for murder," she said. November Story: Tamannaah Bhatia Opens Up About Her Role of Ethical Hacker in Disney+ Hotstar Show.

"During the first week of shoot, we refashioned certain scenes because the team wasn't satisfied with how the character was shaping up," she recalled. Tamannaah feels happy when the audience resonates with her roles. "I always find great joy when fans resonate strongly with my reel characters, which is why I pay great attention to the finer details. I believe that these nuances -- from the styling to the dialogues -- have helped bring Anuradha's character to life in just the manner that we desired," she said.

A seven-episode whodunit, November Story also includes Pasupathy, GM Kumar, Aruldass and Vivek Prasanna among others. November Story releases on May 20 in Hindi, Tamil and Telugu on Disney+ Hotstar VIP.

(The above story first appeared on LatestLY on May 12, 2021 06:00 PM IST. For more news and updates on politics, world, sports, entertainment and lifestyle, log on to our website latestly.com).