OTT Releases Of The Week: Lost In Space Season 3 and Money Heist Season 5 Part II on Netflix, Inside Edge Season 3 on Amazon Prime Video, Bob Biswas on ZEE5 and More

Lost in Space 3, Money Heist Season 5 Part II, Inside Edge 3, Bob Biswas are some interesting OTT releases lined up for release on the first week of December. 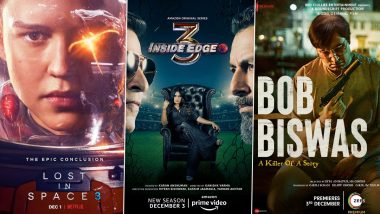 We are moving into December and some big OTT releases are lined up for release on Netflix, Amazon Prime Video, ZEE5 and Disney+ Hotstar. The two most anticipated shows including Lost In Space Season 3 (Dec 1) and Money Heist Season 5 Part II on (Dec 3) are arriving on Netflix in the coming week. Yes, both the shows are going to conclude with the final season and fans can't keep calm! Moving forward to Amazon Prime Video, Richa Chadha and Tanuj Virwani's hit show Inside Edge is returning with Season 3 on the streaming platform on Dec 3 and many fans of the sports drama were eagerly waiting for its premiere. Inside Edge Season 3 Trailer: Richa Chadha, Vivek Anand Oberoi, Aamir Bashir’s Game Gets ‘Personal, Deceptive And Dirty’ (Watch Video).

Abhishek Bachchan, Chitrangada Singh's Bob Biswas is the spin-off to the iconic Bob Biswas character from Sujoy Ghosh’s 2012 thriller, Kahaani. The film is all set to premiere on ZEE5 on December 3. The other interesting OTT releases of the week include Benedict Cumberbatch's The Power of the Dog that arrives on Netflix on Dec 1 while Prateik Babbar's Cobalt Blue releases on Dec 3. Sai Pallavi's Chithirai Sevvanam to premiere on ZEE5 on Dec 3. Take a complete look at every OTT release of the week below. Bob Biswas Trailer: Abhishek Bachchan’s Turn From Innocuous Man to a Killer Looks Promising in This ZEE5 Film (Watch Video).

Ahan Shetty's Bollywood debut Tadap is set for a theatrical release in India on December 3. It will clash with the Hollywood film Resident Evil: Welcome to Raccoon City at the Box Office.

(The above story first appeared on LatestLY on Nov 28, 2021 11:00 PM IST. For more news and updates on politics, world, sports, entertainment and lifestyle, log on to our website latestly.com).