The title of Anushka Sharma's web-series is now out and it's called Paatal Lok. The Sultan actress took to Insta and shared a snippet of the same and must say it'll give you goosebumps. Watch! 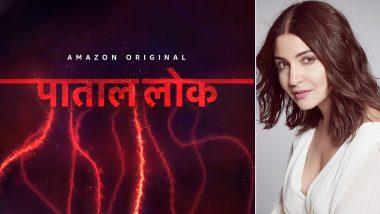 Bollywood actress, Anushka Sharma is on a break of sorts from films but that has not stopped her from searching scripts as a producer. For the unversed, Sharma's Clean State Films has till now invested in films like NH10, Phillauri and Pari. It was recently when Anushka made an announcement via social media that a web-series produced by her soon will make its way on Amazon Prime. Well, the title of the said series is out now and it's called Paatal Lok. The Sultan actress took to Insta and shared a snippet of the same and must say it'll give you goosebumps. After Netflix, Anushka Sharma Announces her Next OTT Production on Amazon Prime (Watch Video).

The video shared by the actress explains the plot of the investigation crime thriller. From lines, like there is a world where justice is served only with bloodshed to showcasing how in the name of humans there are people who are not less than demons, the clip will make you face the reality and how. Paatal Lok is said to be released on the OTT platform on May 15, 2020. 'From the underbelly comes a crime thriller that will change how you look at the world you live in,' Anushka captioned the title announcement post. Shah Rukh Khan’s Zombie Horror Series Betaal, Anushka Sharma’s Mai Included in Netflix India’s Five New Announced Projects.

Check Out Paatal Lok's Teaser Below:

The series has been created by screenplay writer Sudip Sharma of Udta Punjab and NH10 fame. This one stars Gul Panag, Swastika Mukherjee, Neeraj Kabi and Jaideep Ahlawat in key roles. So, how did you like the little teaser and title of Anushka's next production venture? If you ask us, we are impressed. Stay tuned to LatestLY!

(The above story first appeared on LatestLY on Apr 24, 2020 12:47 PM IST. For more news and updates on politics, world, sports, entertainment and lifestyle, log on to our website latestly.com).