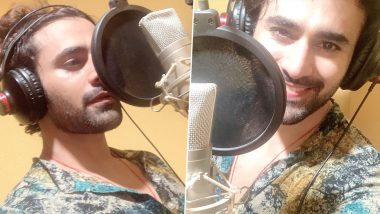 A year ago, actor Pearl V Puri released his first single, Peerh Meri and managed to sweep us off our feet with not just his acting, but also his singing talent. While many have the misconception that Pearl has lent his voice to songs in Phir Bhi Na Maane... Badtameez Dil, his single with Anita Hassanandani, Peerh Meri is his first song. A while back only, the song completed a year, and Twitterati showered their love by trending hashtag #1YearofPeerhMeri. Not only that, Peerh Meri has also crossed 15 Million views. And here the answer to curious fans wondering when will Pearl drop another soulful single? Pearl V Puri To Make His Bollywood Debut Post Lockdown?.

A few days back, Pearl teased fans by posting pictures of recording something and also sang 'Pardesi Pardesi Jaana Nahi'. Well, Pearl has been recording a new song and the hunk, who is currently in his hometown Agra, was spotted at a recording studio. Pearl V Puri Drives Home From Mumbai To Agra, Reveals He Undertook The Roadtrip Because of His Worried Mother (Read Deets).

Well, looks like his fans' prayers have been answered. While details of Pearl's next song are yet to be revealed, it's for sure that the actor has another song up his sleeve to release for his fans. We'll be waiting for Pearl.

(The above story first appeared on LatestLY on Aug 02, 2020 10:45 AM IST. For more news and updates on politics, world, sports, entertainment and lifestyle, log on to our website latestly.com).