Rumour had it that Rahul Vaidya and Disha Parmar have been approached by the makers of the dance reality show Nach Baliye. However, the latest we hear is that Vaidya has declined the offer and has taken up Colors TV's Fear Factor: Khatron Ke Khiladi 11. Read on. 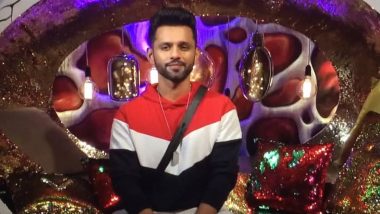 Bigg Boss 14 fame Rahul Vaidya is all over the internet these days. Right from getting papped with girlfriend Disha Parmar to even turning heads with his fashion statements, the boy has surely revived his career after being part of the controversial reality show. Having said that, it's been said that Rahul and Disha have been approached by the makers of the dance reality show Nach Baliye. However, the latest we hear is that Vaidya has declined the offer and has taken up Colors TV's Fear Factor: Khatron Ke Khiladi season 11 instead. Rahul Vaidya Cannot Stop Praising Shah Rukh Khan’s Son Aryan Khan in This Viral Video, Says ‘He Had No Arrogance’.

According to a report in the Times of India, the singer will be seen on the stunt-based show's latest season. A close source to KKK informed the portal, “We had approached Rahul a few weeks after Bigg Boss 14 ended. Things were going back and forth, as he has suffered a back injury and wanted to be sure that it wouldn’t worsen if he performed the stunts. The audience loved him on Bigg Boss 14 and having him on KKK will be an added advantage.” Bigg Boss 14: Rahul Vaidya’s Longtime Girlfriend Disha Parmar Reacts to the Singer’s Marriage Proposal (Watch Video).

“We are still in the process of finalising the list and approaching celebrities. This season will also feature singer Aastha Gill, of DJ Waley Babu fame," the source added further. Rahul Vaidya And Disha Parmar To Marry Soon; Here's Everything We Know About the Wedding!

Well, this will surely be an interesting treat for Rahul Vaidya fans, as who does not want to see his/her favourite celeb facing some daredevil challenges on India's most dangerous show. Apart from Rahul, KKK 11 will also see Abhinav Shukla, Nikki Tamboli and Naagin fame Arjun Bijlani. So, are you excited about RKV being a part of KKK? Tell us in the comment section below. Stay tuned!

(The above story first appeared on LatestLY on Apr 10, 2021 12:20 PM IST. For more news and updates on politics, world, sports, entertainment and lifestyle, log on to our website latestly.com).