Rahul Vaidya might have not won Bigg Boss 14, but he has surely conquered the hearts of many. Recently, a video of the singer went viral online which sees him praising Shah Rukh Khan's son Aryan Khan. Do not believe us? Have a look! 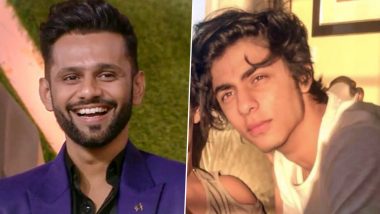 Rahul Vaidya might have not won Bigg Boss 14, but he has surely conquered the hearts of many. The singer's journey on the reality show was a bumpy ride and that's how he became the first runner-up of the show. Even though BB 14 has ended, fans of Vaidya, often dig out old videos of him and release it online. Recently, a clip of Rahul praising Shah Rukh Khan's son Aryan Khan went viral on the internet. In the video, the singer can be seen talking about the time when he met Aryan at a lounge in Mumbai. Bigg Boss 14: Rahul Vaidya Calls Jaan Kumar Sanu a Product of Nepotism and Twitter Mostly Agrees (View Tweets).

In the clip, Rahul could be seen sharing that he met Aryan around 1.30 am on Sunday at St. Regis. He was introduced to the star kid via a friend. The singer praised Aryan for being humble and sans arrogance. He also lauded SRK's upbringing as he could not believe that he was with a superstar's son. Vaidya concluded the video by adding how Aryan was at the venue to wish a friend on his birthday and requested him to ask the security staff to let him in. Later, the bouncers realised who he (Aryan) is and so let him enter the premise. Bigg Boss 14’s Valentine Day’s Special: Disha Parmar Says ‘Yes’ After Rahul Vaidya’s Proposes to Her in a Romantic Setting (Watch Video).

Looks like Aryan is following his daddy's step when it comes to attitude. Talking about Rahul Vaidya, he had a great time on Bigg Boss as we also got to see him proposing the love of his life Disha Parmar on national TV.  Reportedly, the two are also going to get hitched soon. Stay tuned!

(The above story first appeared on LatestLY on Mar 03, 2021 05:34 PM IST. For more news and updates on politics, world, sports, entertainment and lifestyle, log on to our website latestly.com).