Ramayan fame Sunil Lahri's son Krish Pathak is a carbon copy of onscreen Lakshman and here's proof. Check it out. 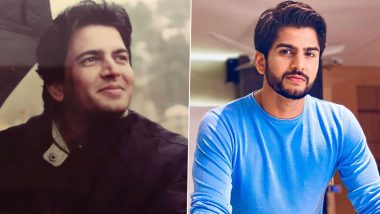 The re-run of the iconic mythological show, Ramayan amid the nationwide lockdown broke all the records as this Ramanand Sagar's 80s saga garnered the highest TRP ever. Not only this, but the show also defeated Game of Thrones viewership with a huge margin. Having said that, Ramayan's cast of Arun Govil as Ram, Dipika Chikhlia as Sita and Sunil Lahri as Lakshman also received a lot of praises for their stellar acting prowess. However, let's forget them for a while and move our concentration to Sunil Lahri's son, Krish Pathak who has been making fans go gaga over his cute looks. Yep, that's correct and we bet you'll also go OMG by looking at the onscreen Lashman's reel life son. Sunil Lahri Recalls A Prank From Ramayan Sets That Left Ramanand Sagar Extremely Livid (Watch Video).

It so happened that a few days back, a fan account of Sunil Lahri shared a collage of Krish and his father and well the internet is completely awestruck. Fans could not keep calm after seeing the uncanny resemblance between the father and son and also declared Krish as a carbon copy of his dad. Not just this, a few comments on the post also tagged Krish as a national crush. Well, a closer look at the picture and the two really look similar and how. Have a look at Pathak's pic below and tell us your thought on the cutie pie. Arun Govil and Sunil Lahri Look Strikingly Handsome in This BTS Picture From Their Ramayan Days and We Just Can't Stop Staring.

Check Out Sunil Lahri And His Son Krish's Picture Below:

For the unversed, Krish is not at all new to the lights, camera and action scenario and has made his debut with the series P.O.W. – Bandi Yuddh. In an earlier interview with Aaj Tak, he had revealed about how connections do work to get an entry into showbiz, but once you are in, then it's your talent which will make you a hit or flop. “It is true that having a connection makes the entry easy but to prove yourself, you need skill. Someone can launch you but your talent will bring you success. Ranveer Singh is the best example of this. The way he proved himself and where he has reached today, is an inspiration," he had said.

Coming back to Krish's dad show, Ramayan, it was earlier aired on DD National daily in morning and night after the lockdown. And currently, it's being re-telecast on Star Plus. Stay tuned!

(The above story first appeared on LatestLY on May 11, 2020 05:27 PM IST. For more news and updates on politics, world, sports, entertainment and lifestyle, log on to our website latestly.com).