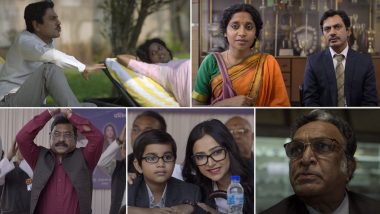 Nawazuddin Siddiqui, one of the versatile actors of Indian Cinema, is going to be back on Netflix with another intriguing show, Serious Men. He was last seen in the crime thriller Raat Akeli Hai and his performance as an inspector was lauded by the audience. Right now, fans of the actor are looking forward to see him in the role of a father, a Mumbaikar, who is an ambitious underachiever and expects that through his son he would be able to improve his family’s fortunes. Serious Men Teaser: Nawazuddin Siddiqui Is a Man With Big Dreams For His Son In This Netflix Project (Watch Video).

Starring Indira Tiwari, Aakshath Das, Shweta Basu Prasad and Nassar in key roles, the makers have released the trailer of Serious Men and it is indeed an intriguing watch. The trailer shows Nawazuddin Siddiqui as Ayyan Mani, a common man, who wants his son to get the best schooling and become like ‘Serious Men’ who works in big firms and rule over others. Ayyan’s son is a genius and he decides to capitalise on his son’s newfound fame. The synopsis of this Netflix Original reads, “When a slum dweller spins a web of lies in pursuit of the upward mobility he has long craved, his ruse could be especially dangerous for his young son.”

Serious Men is helmed by Sudhir Mishra and penned by Bhavesh Mandalia. It is based on a 2010 novel of the same name by Manu Joseph. Produced by Bombay Fables and Cine Raas, Serious Men will premiere on October 2, 2020.

(The above story first appeared on LatestLY on Sep 18, 2020 12:39 PM IST. For more news and updates on politics, world, sports, entertainment and lifestyle, log on to our website latestly.com).