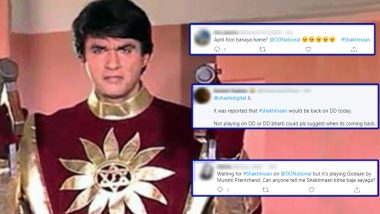 Where is Shaktimaan? People have flooded their Twitter timeline with queries over the timing of re-telecast of the 90s hit show on Doordarshan. While the nation is under lockdown, DD National decided to bring back the old TV series on public demand. After Ramayan made a comeback on television, netizens demanded the return of Shaktimaan. It was soon confirmed that the show would make a comeback from April 1 at 1:00 pm. Hence, everyone was waiting patiently to revisit their childhood. But it has not telecasted on TV yet. Soon, the internet users took over Twitter asking when the show will be re-telecasted. Clearing the air of confusion, Mukesh Khanna, who played the role of Shaktimaan, revealed the re-telecast actual schedule, telecast time and channel in this video. Shaktimaan is Back on Doordarshan! Funny Memes and Jokes Take over Twitter While Every 90s' Kid Goes 'Powerrr!'

The Information and Broadcasting Minister Prakash Javadekar, last week announced the return of Ramanand Sagar's Ramayan on Doordarshan. People, especially those born in the 90s, went nostalgic while cheering the move during the lockdown. They even started demanding the return of other hit shows back then including Shaktimaan, which was a superhero television show that aired on DD 1. The news agency ANI confirmed that the famous serial will be back on TV for one hour every day on DD National Network from April, 2020 at 1:00 pm. Ramayan TV Series Title Song Is Making People Nostalgic As Mythological Series Is Set to Return on Doordarshan During Lockdown.

Doordarshan is all set to telecast Shaktimaan, the famous serial featuring Mukesh Khanna, for 1-hour daily on DD National network from April 2020 at 1 PM: Government of India

Everyone is waiting, but the show has not telecasted on TV yet. Soon, queries over Shaktimaan’s timing, or if at all it was an April Fools’ Day prank, began to surface online.

Waiting for #Shaktimaan on @DDNational but it's playing Godaan by Munshi Premchand. Can anyone tell me Shaktimaan kitne baje aayega?

Fans Await for the Re-Telecast!

It was reported that #shaktimaan would be back on DD today.

Not playing on DD or DD bharti could pls suggest when its coming back.

Actor Mukesh Khanna revealed the re-telecast actual schedule, telecast time and channel in this video. He informed, Shaktimaan will be re-telecasted every night at 8:00 pm.

Now that you know, be ready for tonight to revisit your childhood moments with your superhero, Shaktimaan. We are all dying to watch his alter ego, Pandit Gangadhar Vidhyadhar Mayadhar Omkarnath Shastri as well.

(The above story first appeared on LatestLY on Apr 01, 2020 01:36 PM IST. For more news and updates on politics, world, sports, entertainment and lifestyle, log on to our website latestly.com).