Shehnaaz Gill Gets Awarded by Her Fans for Being the ‘Best Idol’, Cherishes Their Love and Support!

Shehnaaz Gill rose to fame by appearing on the controversial reality show Bigg Boss 13. Also, there's no doubt about it that the singer's fan following doubled up after her stint on the show. And now, she has been awarded as the 'Best Idol' by her admirers. Check it out. 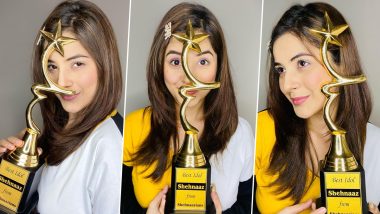 Shehnaaz Gill rose to fame by appearing on the controversial reality show Bigg Boss 13. Also, there's no doubt about it that the singer's fan following doubled up after her stint on the show. Just a mention of the actress on social media and her admirers will shower all the love. Also, post Bigg Boss, Shehnaaz Gill has transformed into a diva and was in the news for her massive weight loss story. Having said that, Shehnaaz (Sana) has now shared a series of pictures on social media which sees her holding an award, courtesy Shehnaazians. Shehnaaz Gill Undergoes Gorgeous Transformation, Says Being Body-Shamed on Bigg Boss 13 Fuelled Her.

In the photos, Gill can be seen posing with different expressions while flaunting the trophy. The reality star has received the 'Best Idol' award from her fans. "My most treasured award Ever!... The one that means the Most by far..," she captioned the post. Not to miss, the gorgeous looking trophy with a star at the top. Shehnaaz Gill's 'Tuada Kutta Tommy' Dialogue Gets a Quirky Musical Touch, Courtesy 'Rasode Mein Kaun Tha' Fame Yashraj Mukhate (Watch Video).

Shehnaaz has a Midas touch, as whatever has her name turns into pure gold online and goes viral. Be it her fashionable pictures to Yashraj Mukhate's 'Tauda Kutta Tauda' rap, all have been an internet hit. Coming to her latest photos, congrats to her. FYI, Shehnaaz also celebrates her birthday on January 27, 2021. Excited? Stay tuned!

(The above story first appeared on LatestLY on Jan 21, 2021 07:43 PM IST. For more news and updates on politics, world, sports, entertainment and lifestyle, log on to our website latestly.com).