Shweta Tiwari’s Ex-Husband Abhinav Kohli Accuses Her of Not Letting Him Meet Their Son Reyaansh, Called Out Cops on Him (Read Details) 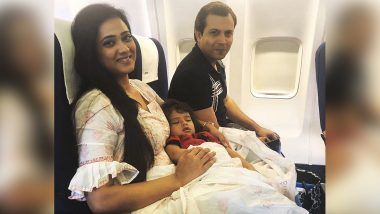 Shweta Tiwari and her ex-husband Abhinav Kohli has been grabbing headlines from quite a long time. It is moreover, the latter, who has been on a revelation spree on social media. From sharing back-to-back collages of step daughter Palak Tiwari to even posting his private chats with Shweta, we really do not know what's on Kohli's mind. Surely, this battle between the ex-flames has turned ugly and the worst part is that it's all over social media. Well, now, in his latest interview with ETimes, Abhinav has accused the Kasautii Zindagii Kay actress of not letting him meet their son Reyaansh. Shweta Tiwari Opens Up On Being Labelled The Reason Behind Her Failed Second Marriage, Says ‘Didn’t Let People’s Opinion Penetrate My Mind’.

He told the portal that the last time he met his son was more than one and a half month back. "I met my son Reyaansh last time on May 15. Shweta let me meet him and at that time she wasn't scared about the coronavirus. But suddenly she is not letting me meet him (Reyaansh) and is making an excuse that due to COVID-19 she wants to keep Reyaansh away from me. On May 15, you allow me to meet the child and suddenly you are talking about coronavirus. For two months I myself didn't try to meet our son for his safety since I was stepping out frequently to buy groceries or other stuff," he said.

He further expressed how an incident made him rush to meet his son, but Shweta called the cops and made him leave the house." On May 14th, Shweta made a video call as Reyaansh was crying and wanted to speak to me. Suddenly, when Shweta left the room and shut the door, he yelled very loudly and threw away the iPad, I got scared for him and immediately rushed to meet him. Shweta called the cops and dragged me out of the house. I mean what was my fault, I got worried for my child,” he added. Shweta Tiwari Calls Abhinav Kohli's Claims Of Living Together A 'Lie', Abhinav Claims Shweta Did Not File Any Police Complaint (View Post).

“During these two months, I stayed in contact with Reyaansh over phone calls and video calls. And when I went to meet him on May 14th, she called the police. I was pleading with the cops to let me meet my baby. I cried for three hours that day at the police station as I just wanted to meet my baby and was feeling helpless. The cops were telling me 'Arre Kohli sahab aap chup hojaao aap mard hokar kyun ro rahe ho' (policemen asked me to stop crying). I told them I just want to meet my child, what crime have I done that you have dragged me here," Kohli told the portal.  Shweta Tiwari's Ex Abhinav Kohli Maintains They Are Still Living Together, Says 'We're Not Separated'.

"On May 15th, I again went to her house because I don't want my son to grow up thinking that his father didn't even try and his mother is so strong and influential that she dragged me out of the house by calling the cops. I played with him. But after that whenever I have tried to meet Reyaansh, she has started making excuses that baby is sleeping. They just shut the door on me. I would shout at the door pyaaru pyaaru but nobody opened the door,” he added.

For the unware, in August 2019 Shweta had accused Abhinav of domestic violence. Kohli was arrested after the TV actress had filed a complaint against him. Stay tuned!

(The above story first appeared on LatestLY on Jul 01, 2020 02:46 PM IST. For more news and updates on politics, world, sports, entertainment and lifestyle, log on to our website latestly.com).