It is being reported that the SAB TV sitcom's makers want to leave no stone unturned to make their sets an as safe place as possible for their actors. 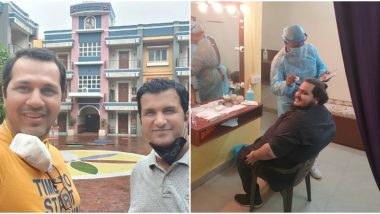 "The makers are deliberating on how to go forward in the best possible way. They are worried for the safety of the cast and crew and with the restrictions in place, how to accommodate a huge cast like theirs and bank episodes. Plus, not all the cast members on the same page and have raised their respective concerns which is why the delay in resuming shoots. They are also weighing other options to shoot which is not risky and safe for all," a Pinkvilla report read. Taarak Mehta Ka Ooltah Chashmah Actor Ghanshyam Nayak Aka Nattu Kaka Reveals His Attachment With The Show, Says 'I Wish to Take My Last Breath on the Set'.

However, the audience's wait will soon be ending, considering that TMKOC's director Malav Rajda, along with his team, has been personally supervising the set's sanitisation, make-up artists wearing PPE kits among other precautionary measures, so as to rectify any loose ends from their parts before actors return to the sets.

We feel the production and direction teams' need to be extra careful, especially after how shoots of Mere Sai and Ek Mahanayak: Dr BR Ambedkar were halted after crew members and an actor were tested positive for COVID-19. In fact, actress Saumya Tandon's Bhabhiji Ghar Par Hain?'s hair-dresser also tested positive for COVDI-19 recently, which has led to the actress also being asked not to shoot for a few days.

(The above story first appeared on LatestLY on Jul 10, 2020 08:21 AM IST. For more news and updates on politics, world, sports, entertainment and lifestyle, log on to our website latestly.com).