It is being said that Disha Vakani will return to Taarak Mehta Ka Ooltah Chashmah soon to film a special episode to commemorate the show's 12 years. However, when contacted, show's producer Asit Kumar Modi, here's what he had to say. 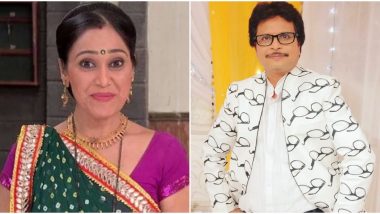 SAB TV's Taarak Mehta Ka Ooltah Chashmah has recently been in the news for its never-ending question of whether or not, actress Disha Vakani, who plays Daya in the show, will return to the show, It can be recalled that Disha, took time off from the show because of her maternity leave and has not returned to the show. A number of reasons like money, pending dues and even husband Mayur not wanting her to return, followed by news of Disha not willing to leave her baby girl and return to work, were reported by the media. However, the mystery remains still. Taarak Mehta Ka Ooltah Chashmah Makers Not Decided on Date For Resuming Shoots

But a few media portals have been reporting about how Disha will return to Taarak Mehta Ka Ooltah Chashmah soon to film a special episode to commemorate the show's 12 years. However, when contacted, show's producer Asit Kumar Modi, here's what he had to say. Taarak Mehta Ka Ooltah Chashmah Makers Tender Apology To MNS Over Calling Hindi as Maharashtra's 'Official Language'(Watch Video).

"Let the shoot resume first, there is no point commenting or discussing this right now. This is not the proper time to speak about what will happen and just speaking for the heck of it because we are all still figuring out a systematic way to first begin the shoot. First, the shoot should begin, and then we will have a little more clarity on how things will be taken forward," he told Pinkvilla.

The Maharashtra Government recently gave the nod to producers to begin filming for their shows and movies. It is being reported that while television show sets are being cleaned and prepped to resume work keeping in mind the government provided regulations, film shoots will take some more time to resume.

(The above story first appeared on LatestLY on Jun 12, 2020 05:57 PM IST. For more news and updates on politics, world, sports, entertainment and lifestyle, log on to our website latestly.com).