The Broken News should be on everyone's weekend agenda as it tries to address what all is wrong with our news channels without being preachy about it. The Broken News streams on Zee5. It stars Sonali Bendre, Shriya Pilgaonkar and Jaideep Ahlawat in key roles. 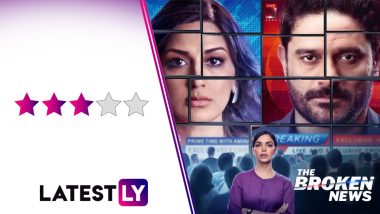 The Broken News review: News today has lost its finesse or credibility. News channels have drama more than Colors or Star Plus. The way Indian news channels are compromised is quite disheartening to watch and that's why The Broken News becomes even more relevant. While it does a good job at addressing the various topics, the ending needed some more rationale. The Broken News: Shriya Pilgaonkar Sheds Light on Her Character in Sonali Bendre, Jaideep Ahlawat’s ZEE5 Show.

Dipankar Sanyal (Jaideep Ahlawat) is in the business of news. He can go to any lengths to rake in TRPs for his channel Josh 24/7. On the contrary, Amina Qureshi's (Sonali Bendre) Awaz Bharti strives to bring news as it is, without making a mockery out of it. Radha Bhargav (Shriya Pilgaonkar) is a star reporter of Awaz Bharti who Dipankar wants to poach for her investigative skills. Rest of the series is how while Qureshi's channel is struggling to stay afloat due to dwindling TRPs and ad spends, Sanyal is flourishing with his fake stories and clickbait journalism.

The Broken News is adapted from BBC Original, Press, which was about two newspapers. Sambit Mishra has adapted it for the Indian audience and has infused the storyline with everything India talked about recently. That makes it quite interesting and a whole lot relatable. You get reminded of all the misinformation or compromised news bulletins on burning issues we have watched over in last couple of years. So there's #MeToo, MMS scandals, social media bullying, the hashtag terrorism and more such issues.

What works in its favour is the pace and limited episodes. Mishra goes right into the story. It starts with the oft used message this day that going against the government doesn't mean the person is against the nation. All other plot points are given an entire episode to bloom which also helps the writer to establish the backstory of all the key characters.

But it's not without its loopholes. The ending is a bit disappointing because it doesn't directly connect with the first episode. The narrative runs in flashback. This disconnect is perhaps one of the biggest flaw of the series. Even if a second season is planned, the end should have been executed well. In fact, it's not even a cliffhanger! Also, the outcomes of every report that's presented on prime time, trustworthy or fake, doesn't have any follow-up. That leaves you high and dry. Just harping about one's popularity isn't enough to establish a character's clout in the business. The impact needs to be there. Apart from the last episode, it's missing everywhere. The Broken News Trailer: Jaideep Ahlawat, Sonali Bendre and Shriya Pilgaonkar’s Series To Stream on ZEE5 From June 10! (Watch Video).

Radha's flippant behaviour at the end needed more meat. It was too hurried to make any great impression on the viewers. I sorely missed a confrontation or any scene for that matter between Dipankar Sanyal and Amina Qureshi. Their opposing views on what news should be deserved one to say the least.

As I’ve said before, I’m so excited to share this with you all. Amina and her story brought me back on set again, doing what I love and for that I will always be grateful.

Performances are one of the key drivers of this series. Jaideep Ahlawat as Sanyal is just fantastic. He keeps it cool, sleek and ruthless. It's so amazing to see Sonali Bendre on screen once again. She will definitely inspire many. Shriya Pilgaonkar is only getting better with every series. There's no stopping this girl!

-no outcomes of news reporting

The Broken News should be on everyone's weekend agenda as it tries to address what all is wrong with our news channels without being preachy about it. The Broken News streams on Zee5.

(The above story first appeared on LatestLY on Jun 10, 2022 07:50 PM IST. For more news and updates on politics, world, sports, entertainment and lifestyle, log on to our website latestly.com).