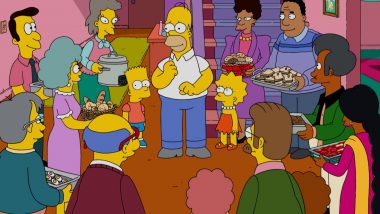 The Black Lives Matter movement is certainly changing a lot of things. While statues of leaders who supported slavery are now being taken down in various cities, we have also seen several shows letting go of their cast members who have in the past indulged in racial slurs. In another development towards increasing diversity and inclusion, one of the longest-running sitcoms, The Simpsons is all set to disallow white actors from voicing non-white characters on the show. Looks like this decision may finally end the Apu controversy that created an uproar last year. Did The Simpsons Predict White House Lights Out? Viral Pics From the Animated Series Shock Netizens of Another Possible Prediction Amid Protests Over George Floyd’s Death.

For the uninitiated, Apu, a South-Asian character was being voiced by Hank Azaria which met with a lot of criticism for its stereotypical representation in a 2017 truTV documentary called The Problem With Apu. Although, it looks like Friday's announcement about the show not using white actors for non-white characters will certainly come as a sigh of relief for many. As per reports, the statement released by The Simpsons producers read, "Moving forward, The Simpsons will no longer have white actors voice non-white characters."

The announcement will soon change things for the sitcom as voice actors for characters including Azaria-voiced Carl Carlson, Apu, Policeman Lou, and Dr Nick Riviera, and Harry Shearer-voiced Dr Hibbert will now have to be replaced. Did The Simpsons Predict Crude Oil Prices to Turn Negative? 6 Times When the American Animated Sitcom’s Predictions Came True.

As for Apu's character, Hank Azaria in January had stated that he would no longer be performing the voice of Indian convenience store owner Apu Nahasapeemapetilon. Recently, Kristen Bell and Jenny Slate also announced that they won't be voicing black characters.

(The above story first appeared on LatestLY on Jun 27, 2020 10:19 AM IST. For more news and updates on politics, world, sports, entertainment and lifestyle, log on to our website latestly.com).