The Thanksgiving Text: Netflix To Make A Movie On Arizona Grandma Who Accidentally Invites A Stranger For Thanksgiving Dinner

The Thanksgiving Text will recount the true tale that began in 2016 when Wanda Dench thought she was texting her grandson to check if he would be coming over for Turkey Day. 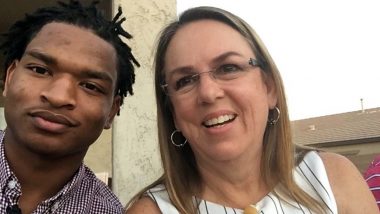 A text by a grandma from Arizona, who accidentally invited a stranger over for Thanksgiving dinner, has inspired streaming giant Netflix to make a movie. What started as an accidental text message, a humorous exchange that quickly went viral on social media, has turned into an unlikely friendship and a heartwarming holiday tradition. Now, Netflix is turning the feel-good story into a feature film, reports variety.com. The Power of the Dog Movie Review: Benedict Cumberbatch’s Netflix Film is a Stellar Psychodrama Set in the Western Era! (LatestLY Exclusive).

The Thanksgiving Text will recount the true tale that began in 2016, when Wanda Dench thought she was texting her grandson to check if he would be coming over for Turkey Day. Apparently, she had the wrong cell phone number. She actually texted Jamal Hinton, a high school senior at the time, who accepted her invitation anyway -- and has attended her feast every year since. In their initial exchange, Hinton received a text from an unknown number inviting him to Thanksgiving dinner. Dwayne Johnson Goes ‘Holy Shit’ After Red Notice Becomes the Most-Watched Netflix Film of All Time (View Post).

When he asked who it was, Dench responded: "Your grandma." After she sent a selfie, Hinton replied: "You not my grandma," and jokingly added: "Can I still get a plate tho?" Dench texted back: "Of course you can. That's what grandma's do ... Feed everyone." In the years following their viral text messages, Hinton and Dench have regularly taken to social media to give updates about their friendship.

It has become routine to share a selfie around Thanksgiving time to document their annual reunions, generating plenty of media coverage in the process. Given the online popularity of their heartening story, Hinton and Dench have seen their social media follower counts rise, with Hinton amassing 129,000 followers on Twitter and Dench racking up more than 26,000.

Dench has since extended the invitation to Hinton's girlfriend and his family to partake in the yearly festivities. After the pandemic hit, their reunion became poignant because Dench's husband of 42 years, Lonnie Dench, who also participated in the Thanksgiving tradition, died in April 2020 from Covid-19 complications.

Dench and Hinton have expressed support and excitement for the upcoming film. "We are excited to share our story with the world. We hope it inspires more people to reach out and make connections that they wouldn't ordinarily make," Dench and Hinton said in a joint statement. "We are so blessed to find a genuine friendship brought together by God from a mistaken text message."

Abdul Williams is writing the screenplay. Netflix has not set a director, nor has it cast the film. The Thanksgiving Text continues Netflix's growing slate of live-action family films featuring kids and teens, which include the upcoming film 'Mixtape"' directed by Valerie Weiss, and starring Gemma Brooke Allen and Julie Bowen.

(The above story first appeared on LatestLY on Dec 03, 2021 12:44 PM IST. For more news and updates on politics, world, sports, entertainment and lifestyle, log on to our website latestly.com).