While WandaVision has elated Marvel fans, one scene seems to become a favourite for meme lovers. The Agatha winking viral image is everywhere and seemingly the internet’s latest funny memes template. Here we bring you some oh-so-relatable jokes that the internet is LOLing at! 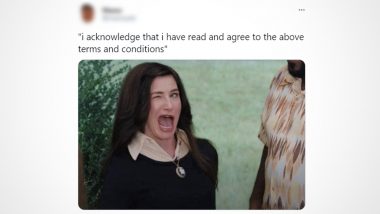 WandaVision is not only a Disney+ hit show, but most of the scenes have become the next-gen relatable content for social media users, much like Baby Yoda in The Mandalorian. While the series has elated Marvel fans, one scene seems to become a favourite for meme lovers. Nothing has taken over quite like the memes of Agatha winking in WandaVision. Have you seen it yet? The irony is that this Agatha (played by iconic Kathryn Hahn) moment that is taking over the internet is not even from a newer episode, but from Episode 3. Now, the Agatha winking viral image is everywhere and seemingly the internet’s latest funny memes template. Here we bring you some oh-so-relatable jokes that the internet is LOLing at!

WandaVision fans start their Friday mornings by letting their emotions go all out on Twitter, with some who are yet to watch the show learning all the spoilers. The show surely some moments giving goosebumps to Marvel fans. From the constant stream of sitcom references to standout scenes like Vision’s speech about grief in Episode 8, WandaVision really is the moment.

To be honest, it is no surprise that the latest meme template taking over the internet comes directly from the show. The winking clip has been there for quite some time now, until the recent weeks that the ‘Agatha Harkness Winking,’ memes has actually taken off. People pair the wink with all the lies we tell throughout our lives. From trying to find an excuse for those late email responses to blatantly lying about reading ‘terms & conditions,’ written on various agencies, netizens are having a wild ride. 7 Moments of the WandaVision Star, Elizabeth Olsen From the MCU That Are Simply Badass!

"i acknowledge that i have read and agree to the above terms and conditions" pic.twitter.com/Ny0PLvQlZ3

"there's another train directly behind this one" pic.twitter.com/Qh1bu5HYa5

Didn't See It Until Now!

"Omg I'm so sorry, I didn't see this until now!" pic.twitter.com/PlyoFoTNQu

“we should totally hang out in person once COVID is over” pic.twitter.com/yDKpOJBHEt

Agatha Winking Got a Meme Painting

Right, got it. No more posting of Agatha Harkness winking, no problem pic.twitter.com/BjHEyuAYcv

Aren’t they hilarious? It goes without saying that Agnes winking is the perfect reaction for just about everything. Even if you are not a Marvel fan or have no idea about the WandaVision world (unless living under a rock), you will totally relate to the winking image!

(The above story first appeared on LatestLY on Mar 04, 2021 03:20 PM IST. For more news and updates on politics, world, sports, entertainment and lifestyle, log on to our website latestly.com).