What Are The Odds Trailer: Yashaswini Dayama, Karanvir Malhotra and Abhay Deol Team Up For a Quirky Coming-Of-Age Tale (Watch Video)

The trailer does promise to be interesting and considering the current lockdown status, we bet viewers will be more than happy to catch a breezy film. 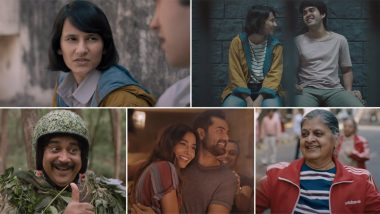 What Are The Odds Trailer (Photo Credits: YouTube/Screengrab/Netflix)

After the super exciting teaser, a trailer of What Are The Odds has now been released. Starring Yashaswini Dayama, Karanvir Malhotra and Abhay Deol, the film looks like a quirky take on relationships. It looks like a coming-of-age tale about Vivek (Yashaswini Dayama) and Ashwin (Karanvir Malhotra), who are opposite poles. The film will see Deol playing the role of a rockstar. The trailer does promise to be interesting and considering the current lockdown status, we bet viewers will be more than happy to catch a breezy film. What Are The Odds? Teaser: Abhay Deol's Film Looks Quirky and Fresh (Watch Video).

The film also stars Monica Dogra, Priyanka Bose, Manurishi and Sulbha Arya in key roles. The trailer has its funny moments as well as and towards the end, we hear Dayama's character saying, "What are the odds that a boy like you would like to hang out with a girl like me?" which pretty much sums up the crux of this film. The film marks the directorial debut of Megha Ramaswamy. Jungle Cry: Abhay Deol Elated About the Global Theatrical Release of His Rugby Film.

What Are The Odds has been produced by Abhay Deol and is all set to stream on Netflix on May 20. This is Deol's second venture on Netflix India, previously, we had seen him in Chopsticks along with Mithila Palkar. The film was earlier presented at the closing night of Indian Film Festival of Los Angeles in 2019. We bet after watching this trailer, fans of Deol are going to be super excited for this breezy film.

(The above story first appeared on LatestLY on May 18, 2020 01:28 PM IST. For more news and updates on politics, world, sports, entertainment and lifestyle, log on to our website latestly.com).