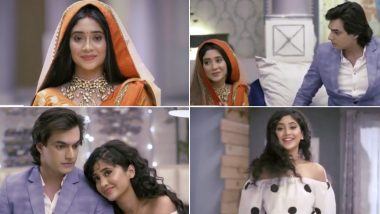 Star Plus' hit serial, Yeh Rishta Kya Kehlata Hai is one of the most loved television shows ever. Right from the Akshara days to now Naira as the female lead, the daily soap has been a fan favourite. One of the main reasons that this Rajan Shahi soap never gets low with the regards to its TRP is because of the content. However, due to the lockdown, the shooting of many serials was kept on halt. Now, amid the unlock phase, shootings have once again kick-started and same is the case with YRKKH. Mohsin Khan (Kartik) and Shivangi Joshi (Naira) have already shot for the promo of the serial and going by the looks of it must say fans are up for a double treat. Yeh Rishta Kya Kehlata Hai Spoilers: Kartik and Naira To Search For Their Daughter On Finding Out That She Is Alive.

In the promo shared on the channel's official social media page, we see Shivangi aka Naira playing a double role. Yep, it's going to be Naira and Tina now. This change in the plot is made as many actors will be unable to make it to the sets due to new rules issued by the government. As per the new clip, Alka Kausal is going to enter the show as a businesswoman wherein Naira and Kartik will try to save the family business by fooling her with the double chaos. We wonder what would be the repercussions of this lie? Shivangi Joshi aka Naira of Yeh Rishta Kya Kehlata Hai Refutes Rumours of Quitting the Show (Details Inside).

Earlier, there were reports that Shivangi aka Naira is soon to quit the show and a new face will take her place. However, she had refuted the rumours and said she is not going anywhere. Looks like YRKKH is up for some super TRPs ahead. After watching the promo, we are dam excited for the episode to air soon. FYI, fresh episodes of Yeh Rishta Kya Kehlata Hai will be airing from July 13. Stay tuned!

(The above story first appeared on LatestLY on Jul 01, 2020 10:42 AM IST. For more news and updates on politics, world, sports, entertainment and lifestyle, log on to our website latestly.com).