After back to back successful music videos, Vinay Singh, the CEO and Founder of TopShotLife, is coming up with its newest addition and fresh voice- Aditya Jha, better known by his stage name “Ady” for “Ghumda Firey”, directed by “Garry Vilkhu”. 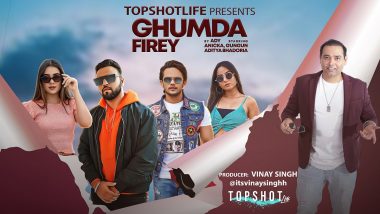 After back to back successful music videos, Vinay Singh, the CEO and Founder of TopShotLife, is coming up with its newest addition and fresh voice- Aditya Jha, better known by his stage name “Ady” for “Ghumda Firey”, directed by “Garry Vilkhu”.

Song “Ghumda Firey” is fun and playful song with a unique storyline and interesting twist, which the audience will surely love and enjoy. We would link to acknowledge the entire cast and crew that worked very hard to make this project happen.

Ady is a New Delhi based Indian Singer, Songwriter and Music Composer. He grew up in a hard-working, low-income family, listening to the music legends like Kishore Kumar and R.D. Burman and Lata Mangeshkar. He has been interested in singing and songwriting since his childhood. Ady has found his own style of music which is a fusion of hip-hop, r&b, and pop elements with Hindi, Punjabi and English lyrics along western themes. He attributes his inspiration to be from all varieties of music, notably figures from both the South Asian and Western music industries such as A.R. Rahman, Shankar Mahadevan, Salim-Suleiman, Vishal Bhardwaj, Jazzy B, GurdaasMaan, Jay Sean, Drake, Chris Brown and many more.

Whereas Aditya Bhadoria, the main lead of the Video is a hard-working simple village boy with big dreams. He moved to the city for education, where he played cricket professionally and took up part-time jobs to support himself and his dreams. He followed his passion in fitness, trained himself and now he inspires and trains other people. His life took a beautiful turn when he bagged title of Rubaru Mr. India Charming Smile & Mr. Model International. We went further to represented India at International Level competing with 30 other countries. His journey towards to his dreams became bigger after he moved to Mumbai and faced all the challenges as an outsider trying to put his mark in the entertainment industry. His talent and hard work bagged him position of coach in MTV Box Cricket League and a few more projects.

Vinay Singh of TopShotLife, an emerging name in the music industry, he established TopShotLife with the mission to recognize and sign promising new talents and provide them with the resources and collaborations in the music industry to help release their music. Vinay Singh's workmanship as a Label producer became evident after the success of his music videos. Vinay Singh has delivered successful hits one after the other with ‘Nightmare- by Vamsi Kalakuntla’, ‘Cute Smile- by Nitin Kumar’ and ‘Instagram Model 2.0- by Vamsi Kalakuntla’ and ‘Kangna- by Rishabh Chaturvedi’.

Vinay Singh is continuously signing with new talented artists from India and USA to bring diverse and quality music for the masses. Ady will be the latest addition to TopShotLife label and is a fresh up-and-coming singer, lyricist and music composer. Vinay is thrilled to announce his next release Ghumda Firey by Ady. “Ady was introduced to me by Aditya Bhadoria. The first time I heard Ady’s voice I was highly impressed and saw a great promise in his talent. It did not take us long to brainstorm ideas and put together the talented team of director Garry Vilkhu and the cast for the music video. We are excited and ready to entertain our audience with Ghumda Firey, which is set to release on Oct 17, 2020.”

When asked about the future projects, Vinay briefly described “We have signed a bunch of known promising artists and fresh talents. To name a few-, Udit Sehgal, Vanit Bakshi, Udit Saxena, JSL Singh and Jahanvi Sangha. With every project, we strive to deliver higher quality and promise to keep entertaining our fans.” Vinay Singh and his core team – Neha Tandon (Creative Director- PR & Marketing) and Manish Shirsikar (VP- Sales & Operations), work non-stop to ensure artist development and global success with the strategic planning and diligence. Vinay and his team are redefining the record label ideology and raising the bar for new talents in the music industry

(The above story first appeared on LatestLY on Oct 16, 2020 12:42 PM IST. For more news and updates on politics, world, sports, entertainment and lifestyle, log on to our website latestly.com).