He has recused himself from all meetings on MCC issues from the first week of this month. 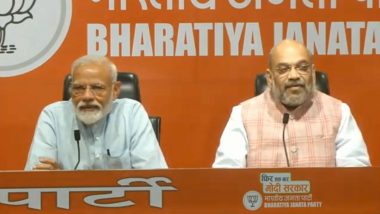 New Delhi, May 18: Election Commissioner Ashok Lavasa has decided to stay away from the meetings related to the Model Code of Conduct (MCC) due to his dissent on the clean chit given to Prime Minister Narendra Modi and BJP President Amit Shah, sources said. PM Narendra Modi Addresses 1st Press Conference in 5 Years, Amit Shah Answers All Questions on His Behalf.

He has recused himself from all meetings on MCC issues from the first week of this month. Lavasa, in his letter, insisted that he would attend the meetings if his minority decisions were also included in the orders of the Commission. Sources said that Lavasa has expressed his dissent on clean chit to four speeches of PM Modi and one speech of Amit Shah. The Full Commission in a majority ruling 2:1, reportedly did not find any MCC violation in the speeches.

The EC on May 4, said that Modi did not violate the model code in his speech in Gujarat's Patan on April 21. The Prime Minister had said that his government kept Pakistan on its toes to secure the safe release of IAF Wing Commander Abhinandan Varthaman. 'Will Never Forgive Sadhvi Pragya Thakur For Insulting Mahatma Gandhi': PM Modi

This was his sixth speech to be cleared by the poll body. The EC also found nothing wrong in Modi's speech in Nanded, Maharashtra, in which he reportedly referred to the Congress as a "sinking Titanic".

Earlier, the poll body cleared Modi's April 1 speech in Wardha, where he attacked Congress President Rahul Gandhi for selectively contesting from a minority-dominated seat in Kerala. The EC also cleared him for his April 9 appeal to first-time voters in Latur to dedicate their first vote to "the Pulwama martyrs".

(The above story first appeared on LatestLY on May 18, 2019 01:22 PM IST. For more news and updates on politics, world, sports, entertainment and lifestyle, log on to our website latestly.com).