Even as the people continue to suffer from COVID-19 pandemic, dengue menace in some areas of Odisha, including the capital city Bhubaneswar has added to the woes. 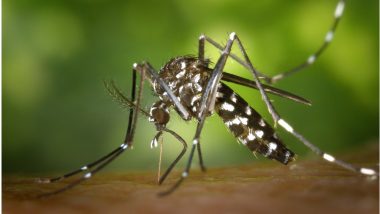 Bhubaneswar, July 16: Even as the people continue to suffer from COVID-19 pandemic, dengue menace in some areas of Odisha, including the capital city Bhubaneswar has added to the woes.

As many 113 dengue cases have been detected in the Khurda district since January, of which 103 cases were identified only in July, said public health director Niranjan Mishra here on Friday. However, the situation is not worse like last year, he said.  People Infected With Dengue in the Past Twice As Likely To Develop Symptoms of COVID-19, Finds New Study

As one has to undergo ELISA test for detection of dengue, he appealed to the people, who are having dengue symptoms to go for the test only at the government facilities.

These four centres are following all the standard norms on dengue testing and people can avail the facility free of cost while private labs are not following the standards, he added.

So far dengue cases have been reported from Chandrasekharpur, Sailashree Vihar, Niladri Vihar, Unit-VIII, Kalpana Square and other areas of the city.

The public health officials and the Bhubaneswar municipal corporation (BMC) have started taking preventive measures in the area to control the disease.

Public health experts urged people to change the water in the air cooler, water pots and the water containers behind the refrigerator every day and maintain cleanliness of the surrounding area of their houses.

Meanwhile, the state has reported 64 deaths and 2,070 fresh cases of COVID-19 on Friday. With this the total COVID-19 death cases in Odisha reached at 4,925.

(The above story first appeared on LatestLY on Jul 16, 2021 02:14 PM IST. For more news and updates on politics, world, sports, entertainment and lifestyle, log on to our website latestly.com).