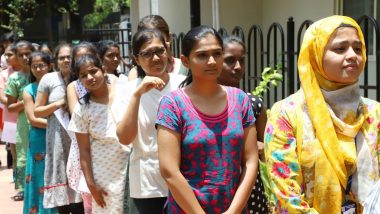 The Madhya Pradesh Board of Secondary Education, MPBSE has declared the class 12 board exam results 2020 today, July 27. After a lot of wait, students finally got their results today. MPBSE declared class 12 board exam result for Arts, Science and Commerce and Vocational courses as well. The marks can be accessed online at the official websites; mpbse.nic.in, mpresults.nic.in, mpbse.mponline.gov.in. Because of huge traffic, it could be possible that the websites take time to respond. In such case, students can visit examresults.net to check and download MPBSE 12th result 2020 online. A total of 68.81% students have passed. According to reports, Khushi Singh from Reva has topped the exams and the top five ranks have been secured by girls. In this article, find out the passing percentage, toppers name, MP 12th result 2020 merit list and overall statistics.

The class 12 board exams in Madhya Pradesh was impacted severely by the pandemic. A few of the exams were cancelled including major papers such as biology, higher mathematics, chemistry, economics, geography, accountancy, which were conducted later under strict social distancing guidelines.

(The above story first appeared on LatestLY on Jul 27, 2020 03:33 PM IST. For more news and updates on politics, world, sports, entertainment and lifestyle, log on to our website latestly.com).