According to the notice issued by MPSC, there is no change in the timetable of the MPSC Engineering Services Preliminary Exam. It will be held on March 27, while the Maharashtra Group B Combined Prelims Exam will be held on April 11. 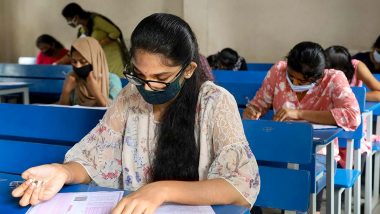 Mumbai, March 12: The Maharashtra Public Service Commission (MPSC) on Thursday announced the exam dates of MPSC's Civil Services Preliminary Exam. The exams will now be held on March 21, 2021. The exam is required for government jobs. According to the notice issued by MPSC, the other two examinations scheduled on March 27 and April 21 will be held as per the schedule and there is no change in that. "The exam will now be held on March 21 across the state at the same centres. The students who have received hall ticket to appear for the exam (earlier scheduled on March 14), will be considered valid for the March 21 exam," the commission said.

The MPSC had on Thursday postponed the exam citing the COVID-19 situation which sparked protests by students. On Thursday, Maharashtra Chief Minister Uddhav Thackeray said that the new date for the exam will be announced on Friday. The Chief Minister assured students that they need not worry about the age criteria, as it won’t be a hurdle for them in appearing for the exam.

The preliminary examination was to take place in April last year, but was repeatedly delayed due to the COVID-19 outbreak. Earlier, the MPSC 2020 prelims exams were scheduled to be conducted on March 14. The exams have been postponed for the fifth time in the past year due to the ongoing COVID-19 crisis. Followed by the agitation after the postponement of the exam, Thackeray had assured students appearing for the MPSC examination that the preliminary exam will be held in a week's time from the date announced earlier.

(The above story first appeared on LatestLY on Mar 12, 2021 12:16 PM IST. For more news and updates on politics, world, sports, entertainment and lifestyle, log on to our website latestly.com).